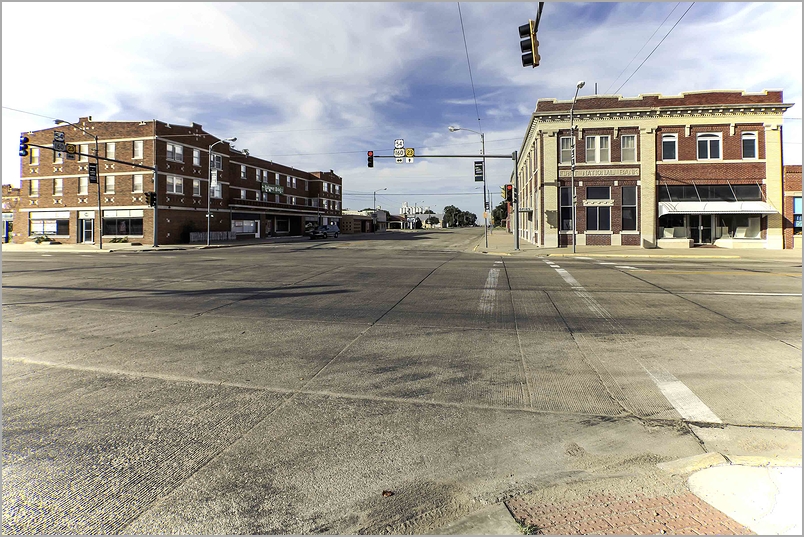 The Lakeway Hotel at left, as well as the bank and businesses at right, are all vacant in this rural town of 1100 people. (The hotel is for sale)

As I crossed the United States in October of 2015 - I was struck by how the economy of the past decade had hollowed out town after town - state after state. Most of the businesses were closed and locked.

It was through this lens that I came to understand much of the frustration which delivered Donald Trump to the White House in 2016. As globalization enriched the busy cities of the east and west coasts - most smaller and more isolated towns throughout the interior of The United States saw neglect and decline. In many of these communities, the youth have moved off for opportunities elsewhere. These towns had served farmers and merchants for generations. The proud and hard-working folks who remain - can't help but be disheartened as they watch their towns dying around them.

What is the purpose of the traffic lights....

@Gérard Flayol: Hi Gérard. The highway running left to right (west to east) carries traffic along two busy U.S. Highway routes, (numbers 54 and 160). There are a good number of large trucks which roll along here, as well as auto traffic heading for larger towns - frequently to do basic shopping. The camera is facing Kansas State Highway 23 (facing north).

A thought-provoking narrative that accompanies this series. I believe you are right. As I strolled through these photos, there's a real sense of desolation.