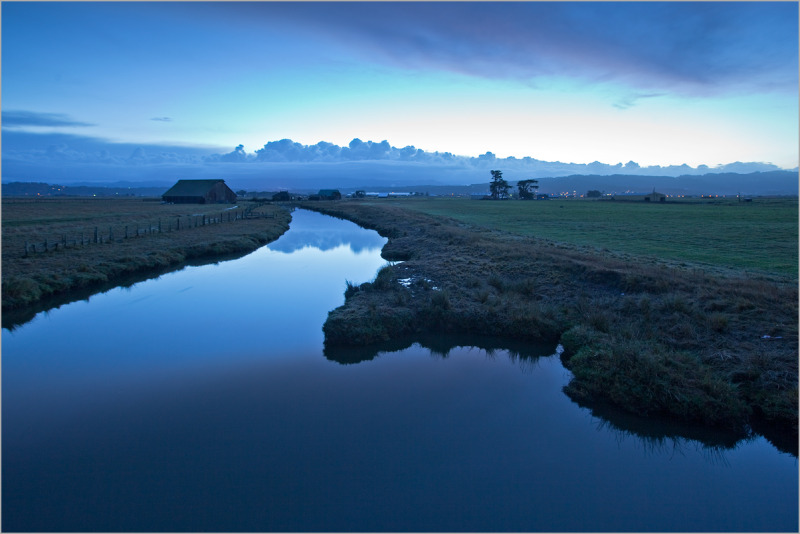 First of a Three Part Series

Two days of hard rain had fallen here and when I stepped out of my motel and into the predawn morning - Jupiter was shinning to the west and I sensed this day could start with a dramatic sunrise. Experience told me just were to go.

Remember my 2009 Fine Art Nude posting of a lovely model - Tru Talise, gazing up at a yellow arrow road sign, standing along a narrow road that ran by a channel of water? I took that image from a bridge and knew that was where I would await this dawn.

Here is that earlier nude image:

(always worth a second viewing - one of my favorites)

Today's photograph as well as the next two were taken on Wednesday from a bridge over Mad River Slough in Humboldt County. The same spot where I shot that nude image. This current series were taken facing east - rather than south in the earlier effort.

I mention all of this to say that the sign that Tru was looking up at is gone. Judging from the tire tracks upon the rain soaked levee - this happened recently. There were more tracks in the mud just beyond. I suspect that they are from the tow truck that extricated the unfortunate motorist's vehicle.

It's a beautiful calm scene Mr. P, I like the cool blue hues.

superb composition and great light - the blue tone sets a fantastic calm mood here! well done! i am looking forward to the following parts of this series...

Mind if I have a coffee with this? best…jf

@ordinaryimages: The only thing more perfect than your request, Jerry - is that I might join you. Let's make that happen some one of these days...S.