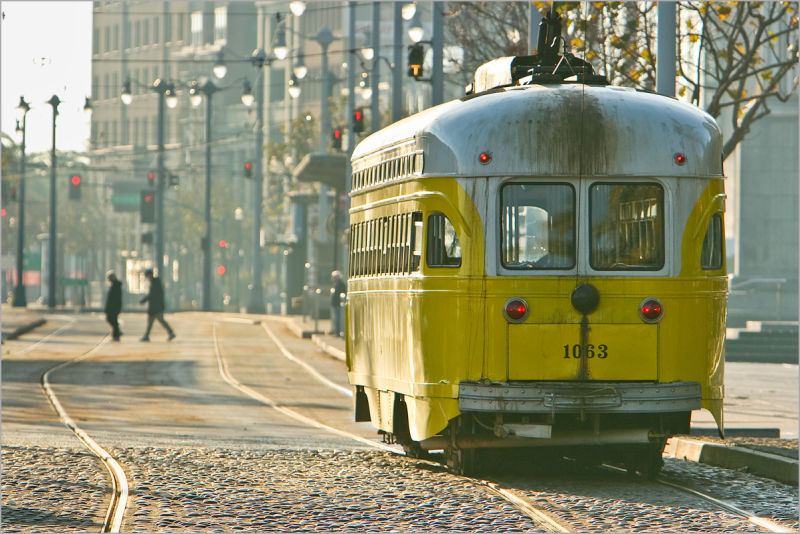 OUT of the past and IN to the future - along the historic trolley car "F" Line in San Francisco. This project was the vision of California U. S. Senator Diane Feinstein back when she was mayor of the city in the late 1970's.

There are streetcars from all around the United States and from around the world. As of today - there are 31 fully operational trolleys, another 21 that are currently being restored, and an additional 15 awaiting parts and/or funding.

Like Time herself passing by . . what a lovely image.

Oh man I love this shot, too, Stephen. The streetcars are just perfect there aren't they?? Is this rioght down about where Mission and MArket all come together across from the mall??? You must have been there at O-Dark-THirty man! Ain't nobody there!!!

You take me to the City for my morning coffee...it's all there but the noise. best…jf

Nice, I love the focus on this.

I like these tones and the flattish contrast. The whole project sounds fascinating and a great way to keep these old trams running.

...and there's alinkto all of the cars if you're interested. Cheers.

lovely scene and brings back many fond memories.

Thanks for that, what a great collection, I think I prefer the smaller models from Porto and New Orleans. I'll also be going to Blackpool later this year to let the kids see the Illuminations, see if I can picture any of the trams all dressed up in lights eh?

Faboulous idea! I thinks it's a fantastic project. I like very much these vintage cars.