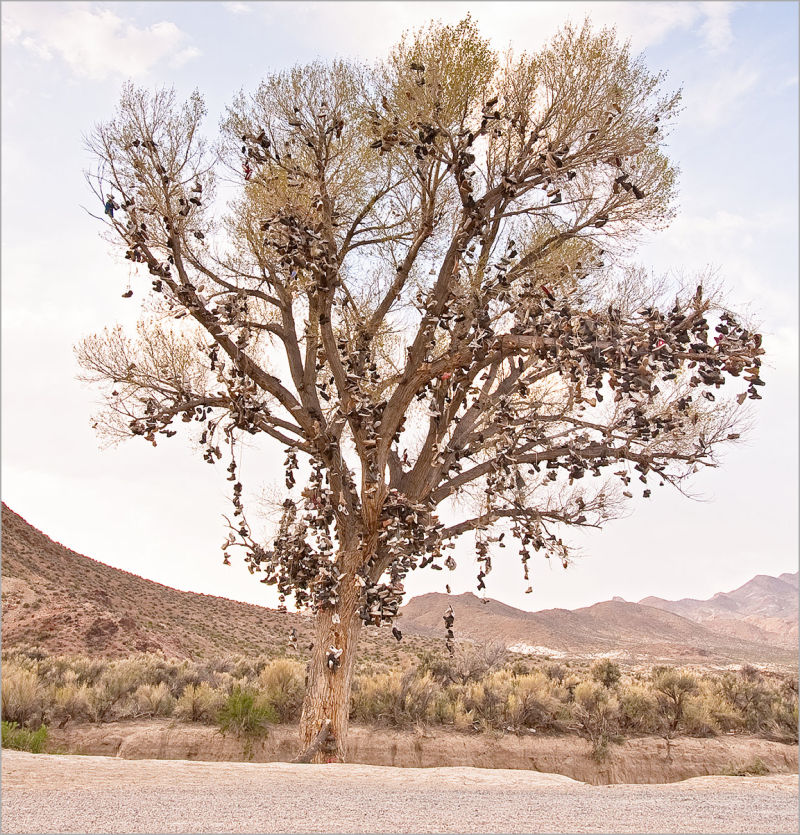 Posted by Stephen Phillips (San Francisco, United States) on 17 May 2011 in Lifestyle & Culture and Portfolio.

This 70 foot Cottonwood Tree has collected shoes from hundreds of people for well over two decades. Here is the Shoe Tree's Story - as reported by The Los Angeles Times newspaper...

"Fredda Stevenson sized up the despondent young man who'd slunk into her remote watering hole on U.S. Highway 50. He was thirsting for beer and, as Stevenson learned, advice.

His new bride, he grumbled, had blown all their cash on slot machines in Reno. Then they'd sped east through 100 miles of sagebrush and hills as dark and lumpy as mud pies. They camped down the road from Stevenson's bar, near a large cottonwood tree that had inexplicably thrived in Nevada's badlands. The couple started quarreling.

She threatened to walk home. He snatched her shoes, hurled them into the cottonwood's branches and said: Go ahead. Try. He stormed off with the car and ended up two miles away, at Old Middlegate Station. He polished off two beers before listening to Stevenson's sage counsel:

"You want to be married for the rest of your life? You better learn to say 'I'm sorry' now."

As Stevenson told it, the groom shuffled back and apologized. Then, at his bride's insistence, he hurled his own shoes into the tree.

That was in the late 1980s. Ever since, other passersby have pulled over and added their footwear — worn-out sneakers and too-tight pumps, ballet slippers and snowshoes. Horseshoes knotted with baling twine. Plastic stilettos from brothel courtesans (or so locals claim)."

A true story for our Silly Tuesday - and the story continues tomorrow...

Great shot...for a stubborn minute I was trying to figure out what kind of birds these were.... ;-)
Love that story !! I will tune in for more.

A strange phenomenon . . how easily a trend can get set !

Ha ha, you have one too!
After the restoration of the South Marine Park in South Shields, the old shoe tree was cleaned up!
We started a new one in another sea front park a couple of hundred yards down the road.
It is not as well festooned as this one!

Super capture and story for a Silly Tuesday Stephen! ;-))

A fascinating tree and a great story to go along. I wonder how that couple is doing now?

What an amazing story...a coiol shot and the story is a real "kick" (boooo)

This is fantastic! It amazes me how these things get started and grow. great story and photo!

The shoes are migrating early this year. Their mating calls create a haunting sound as the sun sets behind the mountains. This is a fun shot!

I shared this on facebook. it's a story worth to be spread around.