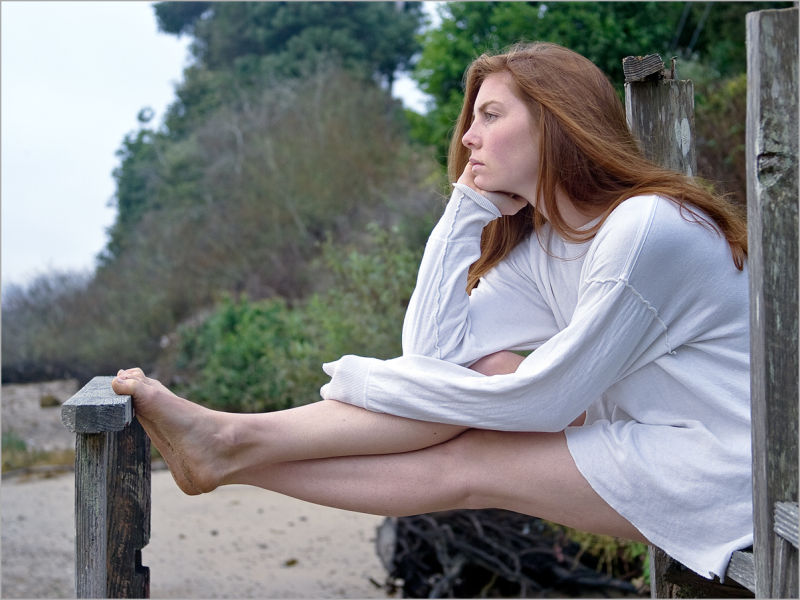 Study At The Old Pier

The shoreline of Tomales Bay

And I am the April Fool. Before yesterday - I had posted 8 images in a row shot on Provia 100 film in 2005. Four with Molly followed by four with Jesse. Yesterday's portrait of Jesse was shot in 2005 as well. In fact, it was shot four days before the 'Delta' series. But it was shot with my first digital SLR - the Canon D60. I felt certain someone would comment on either the difference or how good the film looked - but nobody took the bait. Today's image and the rest of this series is also digital.

That said - having worked the film images and then these - I will never feel as loving about film again. I loved Provia 100 transparency film. But working with similar images these past few days has been an eye-opener. Here, I will examine my thoughts on the matter:

Foremost is the time involved in scanning the film images. Most of my working transparencies are unmounted. After having them processed, I would cut them into lengths of six frames and store them in archival sleeves.

I began by looking at the images on a light table (in the sleeves) - noting the frame numbers of those from which I wanted digital scans. Next, I'd pull out each strip, load it into the carrier and insert that into the scanner. The scanner would quickly make an 'index' view of the six images. I would select a frame I wanted to scan and the machine obediently created a 'pre-scan' of that image. With the pre-scan I could adjust the edge to make sure I was not wasting storage space on black or clear acetate edges. Finally, it was time to scan. At maximum resolution - this took about 30 to 40 seconds to complete.

After the scan session - I would then import the images into Lightroom both to index them into the system and to work on them.

On some of the images - I would note a small number of either flaws or dust that the scanner couldn't automatically handle. Most of these took just a couple of seconds with the either the healing brush or the clone tool. But every once in awhile, there was some pixelated spot where scanner hit something that scattered the light. The result would be a small spot where the pixels were scrambled. If this happened at the tip of a nose, or the edge of an eyeball - it required rebuilding the area, one pixel at a time. It has only happened a couple of times- but still...

And this doesn't get into the cost involved with film. I have spent roughly $10,000 on seven digital cameras since converting to digital in 2005. I have sold two of them and given 2 away.

Back in the film days - if I wanted a print from a transparency - that was another major cost. An 11x14 from slide cost $10 to 12. and would take a week. A 12x18 off of the Pixma printer sitting right beside me here costs about $2.30 and the quality is far better with much more accurate color balance.

Don't get me wrong - I am very grateful to be able to move my slides into the computer. But working with straight RAW files has suddenly become a delicious luxury.

Superb feeling here, and i love what you say & share, a lesson, thanks !

Digital certainly makes life so much easier and less expensive when trying things out.This is a super image with very nice composition and a lovely model.

The freedom to make mistakes and learn how to put them right is huge plus with digital, we couldn't afford to that with 35mm film, you either got it right or wasted your cash!
Also there feels to me to be a lot more satisfaction in digital processing being able to manipulate pixels and correct scenes in a way that was never wholly possible with an enlarger.

The larger picture is quite superb, so clear and sharp with a fresher brighter feel than what the more compressed view in AM3 provides, it really is a super shot Stephen, so damned natural.

@Curly: Thanks, Curly - reading your post I was again reminded that I still shoot like a film photographer most of the time. Every time I press the shutter release - it is a commitment. I rarely shoot rapid fire, even when it might be the thing to do - just because I think of doing it after the fact. But it is clear that there is part of this that serves me well - really taking time to build a sense of what I want to 'see' instead of just shooting in the hopes that if I shoot enough I'll get lucky.

Interesting dialog here about the times many of us have been thru . . but, yes, emerging from the burden of those costs associated with film was key. Lovely soft, gentle wash of light shot here, too.

wonderful ! such a natural and but so feminine pose . She looks great ! Love her top ;)

As telephones should have been cellular since the beginning, photography should have been digital. Sometimes progress is too slow... A lot of slides and no nostalgia here too! Oh, was forgetting: lovely portrait of a nice model.

@karetnikov: I take somewhat the Buddhist view in such matters - that things happen as they do. And sometimes there is a clear downside to technology expanding faster than our comprehension and social systems might adapt to the changes they bring. I am happy to see that most photography schools still insist that students not only learn - but start with traditional photographic processes. Grasping a firm understanding of that process really grounds the approach in a most expansive way - even when coming back to the state-of-the-art. Having said this, great good has come with the liberation of technology - and the power it has brought to the peoples of the earth. It is great to hear from you and thanks.

@The#1AcePhotog: Thanks for your post, #1. Hopefully, I'm thinking it - not over-thinking it. I'm not obsessing. Please understand that I built my first darkroom in 1966. So here I am just reflecting on a milestone on the journey. By the way, I love both Portlands. Is yours Maine or Oregon? Or,is there another?

I agree about the move to digital. I agonized about abandoning my 35mm and 2-1/4 cameras. And agonized. My wife finally told me to get over it and just make the change. Good advice. I like this shot, by the way. Great pose, and I like the gaze. Wonderful profile.

@David: Thanks very much, David. I started my photographic odyssey at the age of 8 and had a working darkroom from the age of fifteen - so I was really vested in the methodology. Still, I've always loved technology and was paying close attention to the quality of each. I converted in 2006. By that time it was clear that digital files were producing superior information from which to work.

The one remaining objection was paper - and that has been met in the past five years. The finer papers and coatings today are stunning. The cost of real silver emulsion paper has become prohibitive at the same time - and there is also the environmental considerations with all of the chemistry that goes along with producing a paper emulsion print. Still - a well produced silver print will have my knees buckle with pleasure.

Whether film or digital, this is easily the portrait of the day (again) and my favourite. There is never anything samey about the models, poses or location... but the one constant is the standard. top drawer Mr P!

I read what you're saying, still I went back to film after having shot for several years in digital; but I guess I don't have the same volume of negatives as you :-)

I can never see a day in which I'll go back to film. Now that I've shot digital, I don't think film has the edge in quality that I thought it did. Nice thoughtful portrait!

At first I thought of digital as going over to the dark side. ;-) Now I see that it's like having my own personal photo lab right on my computer.

Wow, fabulous portrait! What's she thinking???
I've done both...the exhausting processing of film and would never go back after having the immediate availability of digital...I guess that's where my A.D.D. comes in to play though, too :)

@Nina: I am too old to have been diagnosed with ADD, but I've got it in spades - another blessing of our digital darkrooms. Thanks, Nina.