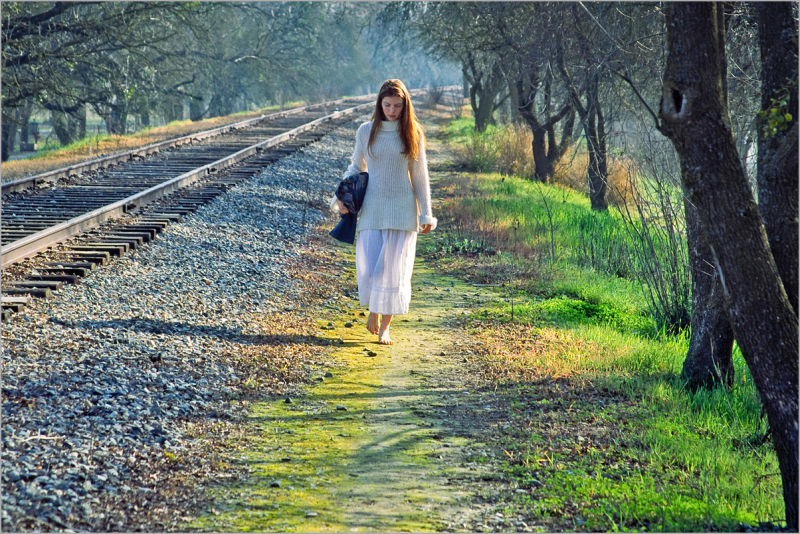 A Path In The Sun

Silt - carried downstream from the numerous rivers of Northern California has been deposited in the delta for eons. The soils here are among the richest on earth.

This area once billed itself as 'The Pear Capitol of The World'. Many of the orchards have been allowed to go to seed or have been eradicated in favor of wine grapes. A phenomenon happening with many crops throughout central and coastal California.

The moss along the pathway is common during the winter months here where fog, rain, and cool temperatures along with high humidity; are the dominant factors for the area's climate.

The lush green carpet will vanish during the months of summer and fall. Those months will see mostly sunny days here, where daytime highs frequently exceed 100º F (38º C).

A lovely graceful image....love the sunlight weaving in and out of her dress and hair.
An evocative shot, Stephen.

excellent light
it has a "woodstock" mood to it :)

Oh my, Stephen, the girl, the lines, the subtle color, the light, this has got it all. And a fil image at that. Just lovely.

An absolute stunner, shot in glorious backlit conditions, but surely you have worked a little harder to enhance the lighting and bring this freshness of colour to the photograph? Perhaps a little dodge and burn here and there?
The scene is alive with light and vivid colour, you can almost smell it.

@Curly: Good eye, Curly - I used a near embarrassment of Photoshop applications on this image. I know you will understand when I say that I 'really got into it'. I love the feel of this image and kept finding things to tweak. Beyond the obvious - bringing light to Jesse's face and hair - I broad-feathered about two-thirds of the background to darken it. In the background - there were two utility poles and a hole of sky above Jesse's right shoulder that seemed terribly distracting. I filled that area with foliage to complete the tree canopy.

Finally - I applied the 'Shadows/Highlight' effect over the right third of the image to bring out the detail of bark on the trees and to dull the light off of the river - allowing the eye to settle on the subject.

The best commentary on this is that there was sufficient information in the Provia 100 exposure to allow all of this. The film was unmounted which I believe gives a slight advantage in getting a good scan. After a slight edge crop - I wound up starting with a 38.3 MB image. This I cropped even more to eliminate light from the sky and the right edge. Here is the original from scan:

Ironically - I kind of like the full original. Still, I love the final image and I'm happy I took the time to produce it. There will be more conversation on this from my post over the next few days - I hope you will be part of it.

wow, this is first-rate photography and spotlight material! the ephemeral mood that prevails here is truly appealing, as are the lush yet subdued colours and the leading line provided by the rail tracks. i also like the brilliant effect achieved by the contrast/juxtaposition of the girl's red hair and white clothes and the fact that she's barefoot. this and her raised foot makes her appear to hover above the ground. i'm quite speechless, really!

A wonderful soft and introspective shot Stephen! Great visual play between the path and rails. The light is spot on! Well done Stephen! 5-stars!!! Bravo! ;-)

Wonderful use of natural light - truly a superb shot!

Soooo incredibly beautiful Stephen! Like a dream... and she's so pure, graceful... ethereal!!! Every detail from the lighting, tonality, focus, composition to the mood of the subject, just couldn't be more exquisite! Haven't seen such a wonderfully moving portraiture for a long long time! Bravo my friend!

very nice work .. i like the how the light hits the subject ...

Makes it all the more satisfying to view this remarkable transformation, like yourself I can really get into a good bit of play with the Photoshop brushes and tools, I think you've done a tremendous job with this one - bravo!

When I worked on the railway I saw quite a few foxes walking the track,but not one like Jesse,or I would never have left the job.

Like a scene from out of a movie, this image carries with it emotion.. the girl's posture, her gauzy skirt, the mist on the tracks in the background.. all very dreamy. The story behind the setting is nice as well. Definitely on my top of lists today.

Nice one Stephen, I would've been happy with the original but you've then raised it to another level as it's come alive. Your choice of location is again inspired...how much of it is pre-planned or researched and how much of it is on the hoof with the model?

@Ted: Greetings, Ted - thanks for the kind words. My favorite pastime is exploring the back roads. As I explore - I'll spy locations that would be perfect with a model and make a mental note about it. The same thing happens wherever I go, even driving around The City. Whenever possible - I try to thoroughly scout a location before shooting. I try to note the light, shadows, interesting elements, framing opportunities, safety concerns, and obstructions that might hamper our work. Generally, the more preparation I put in - the smoother the shoot and the more we can accomplish.

Wonderful sense of serenity in this.

love the picture. she looks so careless and free :)

love the freshness... wonderful play of light and shadows