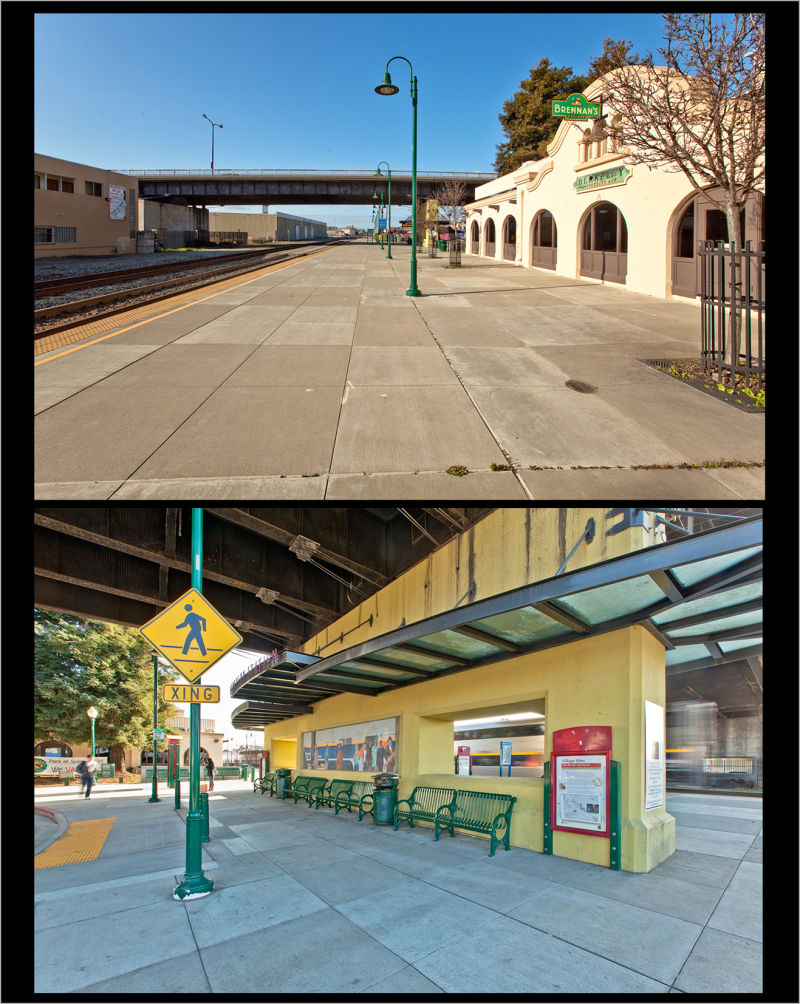 A Train Stop in Berkeley

Berkeley once had a station worthy of the title (top view). A classic Spanish style Southern Pacific Depot with the iconic round-tile roof and adobe arched walls. That style of station once dominated the central and southern regions of California.

This old station now houses a sports bar and hoffbrau called Brennan's. The popular tavern dates back to The Fifties and used to be in a building next to the depot. That building that has been torn down.

The Berkeley Amtrak 'Station' - (a stop actually) - is now beneath the University Avenue overpass (bottom view). The underside of the road surface serves as its roof. The wind and the rain blow through with relative freedom.

Still, Amtrak and the City of Berkeley did pretty well with the hand they were dealt in downsizing and automating this platform. In fact, it is kind of cool - and very Berkeley. Another look, tomorrow...

Luminous images! I will come back to UCB soon!

It all looks very different from train stations here in Germany or the UK,I guess it all has to do with age.Most big stations in the UK are Victorian built and steeped in history !!

@Anthony Morgan Lambert: A few of our old stations are still around and some have been restored, such as this one in Saint Louis:

Most have multiple uses. This one doubles as the lobby to the Saint Louis Hyatt Hotel and entrance to a very cool shopping center built around the old (and mostly useless) train platforms. Airlines killed passenger rail service here. The distances are just too vast. For instance - the state of Oregon alone is slightly larger than all of the British Isles combined. What little rail service here that remains is heavily subsidized and shares rails with freight trains - and so on the longer routes, is almost always late.

My home town! I well remember this place.

Once again I am impressed with the cleanliness of the place, most unlike railway stations or stops in the UK. Love the clean lines of the upper picture too.

@Curly: I took three trains while in England (Edinburgh, Brighton, and Dover / Canterbury) and remember all of the stations being clean and fairly well maintained. I'm guessing that now that the economies everywhere throughout the Western World are in collapse - and public workers are being discarded - that this is changing everywhere.

interesting juxtaposition and a fitting documentary to the "development" of train traffic in the usa! perhaps it's so clean - which is indeed striking! - because not so many people use it any more ...

Fascinating shot,if you had done a bit of weeding it would have been pristine.

@Jeff: Hey, Jeff - I've been lost in the weeds for years. I kinda like it here.

Beautiful area and capture! Wonderful color and character. Well seen and captured with this wonderful photography!!!!