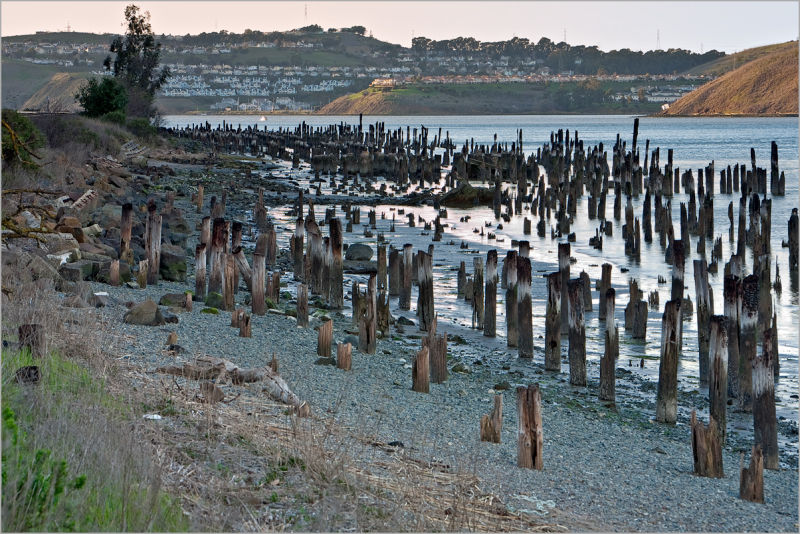 Pilings In The Carquinez Strait (II)

The Carquinez Strait is a narrow passage of water connecting Suisun Bay with San Pablo Bay - part of the complex geography that allows the waters of interior California to find passage to The Golden Gate and open ocean.

The straight is 9 miles ( 14.5 km ) long - running from the site of the Benicia Bridge at the eastern most point - to the tip of Mare Island at Vallejo, California to the west.

I have posted numerous images from along this body of water. Todays view shows much of the center section of the strait. Until Southern Pacific railroad opened the rail only drawbridge at Benicia in 1930 - this was as far west as transcontinental trains could go on their way to San Francisco. At Benicia - the trains would be loaded onto rail barges and brought across to this point at Port Costa.

Port Costa became a massive warehousing facility for goods bound to the Bay Area. These pilings are all that remains of the warehouses and wharfs that lined the southern shoreline of the strait. Though this is the highest density of pilings - there are ample numbers of them protruding from along the entire length of the strait.

Each day, forty-two Amtrak passenger trains make their way along The Carquinez Strait and much of San Pablo Bay as well. This is one of the most beautiful rail experiences anywhere.

Tomorrow's post is taken from the tip of the old rail pier in Benicia - looking over to what remains of the town of Port Costa. Taken at sunset - it is one of my favorite images.

A map of the Carquinez Starit:

[photographic note]: this late afternoon capture was disappointing in that the sky was a flat off white. After trying several unsuccessful methods to create some interest in the background I finally did a 'new layer cut' and inserted a gradient layer in between with this orange to blue coloring. To have it look natural - I did a 'similar' select of the highlight area of the water and feathered these as a separate layer. Finally - I introduced the same gradient here. After merging the highlights back into the image, I then darkened the entire stream to give it a natural look as well.

An amazing image, really interesting with all the wood on the shore line

Pretty seamless result with the sky processing, this place must have been a hive of activity years ago.

The clusters of pilings create a very surreal image. Lovely soft light and colour you get here. Interesting details you provide as well.

As impressive defenses, it is extraordinary

This shot has a totally different effect than yesterday's photo. Thanks for the history lesson, too!

Like this overview, what a strange place. Lovely tones also.

A beautiful photo and a great historic background--thanks

wonderful dof and pov, and many different, equally intriguing lines and perspectives, e.g. the houses on the hillside and the pilings themselves.

Fascinating image Stephen, the pilings are amazing and seem to go on forever. Great job on the post processing, the hard work was well worth it, love the colors, details and highlights.

It's just amazing to me just how many there are.

A fascinating view of the past here. Interesting to see the larger picture.

great pattern, such an unearthy view

Fantastic corner, I like very much the patterns they create!