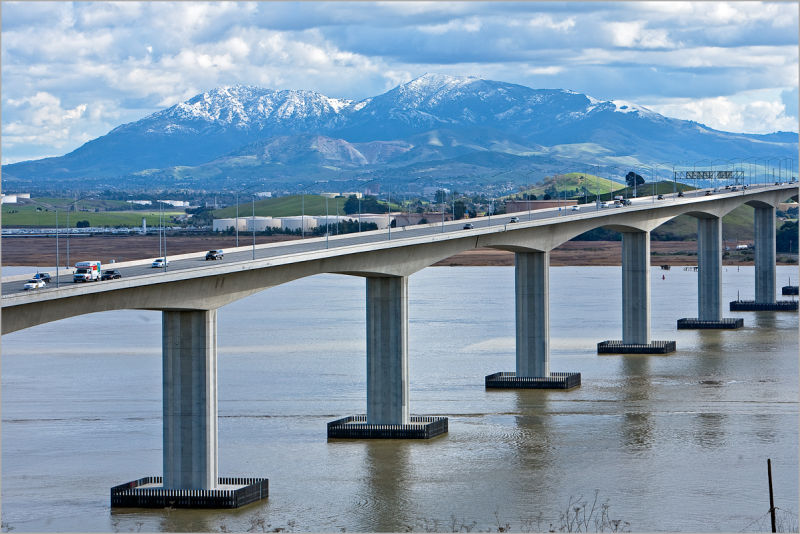 As with our image yesterday - this image was taken on Sunday. The capture was at about three o'clock in the afternoon. And again - it is rare for any snow to stick around all day on any of our local peaks.

With a summit at 3849 feet (1173 m) - Mount Diablo is considerably larger than Mount Tamalpias. The summit stands about 30 miles east of downtown San Francisco.

The bridge in the foreground is a new construction across the Carquinez Strait at Benicia. If I were to pan slightly to the right you would see the old span which used to carry all of the traffic in both directions. A terrible bottleneck. The new bridge now bares the northbound traffic while the old one takes care of everyone and everything rolling south. A much happier arrangement.

I have been posting numerous images of this strait recently. Those images were all more towards the west end. This bridge spans the eastern most point of the strait as it opens into Suisun Bay. We will look there tomorrow.

A wonderful landscape, with these majestic mountains…

What an impressive mountainscape. WOW!

I hear we have more of the evil white stuff on the way, perhaps down to swa level later this week.

@Monterey John: Well, look on the bright side, Mr. Wilson - we will not need to hear the dread repeated "D-Word" this summer!

A very beautiful bridge, I might add...and a wonderful look at Diablo. Lots of good snow and some more coming perhaps, as John mentions!! I like the effect your settings have on the water below!!

Hi Stephen, just checking in as I haven't been around for a while. What a whole pile of interesting photos I've been missing. I love my bridges but can't make my mind up on this one (nothing to do with your photography). It's quite bold and grand but feel it's lacking in a bit of character. I'm going to sleep on it and take another look at it tomorrow.

@Mike: Mike! It is so good to hear from you. I hope you are doing well. - - - Please don't spend to much time thinking about this bridge. There is a reason it was designed as it is. You will have a better idea of all of this after seeing my post here on Friday (2/25). My best to you!

The scene is striking-- the mountains look like a theatrical backdrop. It must be the clear winter air-- or your masterful technique!