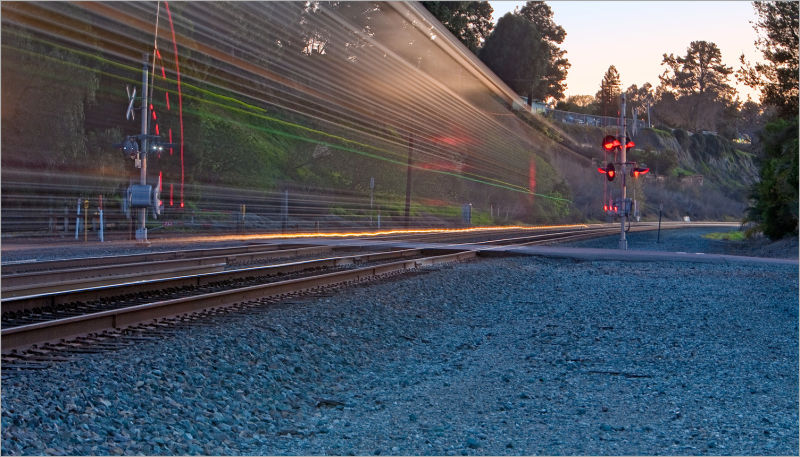 Riding Into The Sunset

This is a passenger train rolling along about half-an-hour after sunset. I was actually waiting for a train scheduled to pass in the other direction and this one caught me by surprise. The warm light reflecting off the rail car was coming off of San Pablo Bay, a short distance to the right. The day's twilight was shinning off of the water and through a break in the trees formed where the road crosses the tracks.

This is a westbound Amtrak 'San Joaquin' train nearing it's destination in the San Francisco Bay Area. Here, rolling through a crossing in Pinole, California.

The train started its journey at the far end of The San Joaquin Valley about six hours earlier. It has three more quick stops to make in Richmond, Berkeley, and Emeryville; before ending the run at Oakland's Jack London Square - about 30 minutes from here.

Fantastic! This is one of the best for me!

The lines of light are absolutely awesome. Terrific image!

totally cool shot! wow, amazing capture and i especially like the ghost train's reflection of the sun :)

The B&W's of this series are outstanding but this is sublime.

this a really great ghost train and a fine longtime exposure!

This one is awesome Stephen...sorry, really under the weather lately but I am watching!