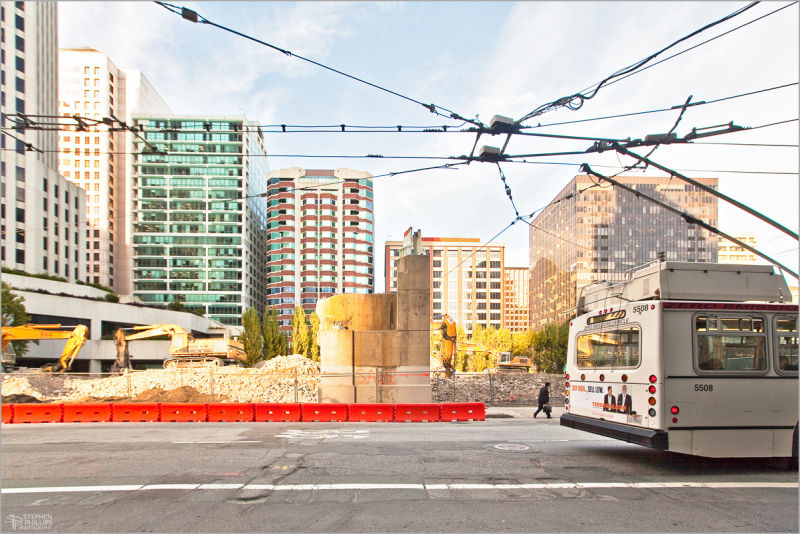 One of the problems I observed before they began demolishing the steel bridge that stood here was that the bridge held the rigging for the electric bus wires aloft. So clearly the wires were going to need to come down for the tear-down and then re-rigged before the buses could resume service.

I figured they would need to place heavy poles to accomplish this. But someone was really clever and instead painted "SAVE" on three of the big concrete columns supporting the bridge. When the bridge was taken down - they simply lassoed steel cables around the supports and reconnected the wires. The buses were rolling on the next morning. Fabulous!

This is the same spot were I captured those dramatic images of them shooting water into the sunset as they were knocking down the bridge...

Here is a link to my October 1st post which shows the wires passing under the bridge as well as the columns:

[tomorrow]: the view two days later - and much earlier in the day.

Well this seems to be a good solution then... Who would have thought it was so easy. I really like your posts on day-to-day development in your city...

An image which does not miss "contacts"

And I bet it was a construction worker and not an architect who thought that one out !!

That's one of the things I like about San Francsico, people actually THINK there! Great job here STephen!!

Cities are constantly changing... sad and exciting at the same time.

@Bethany: This is largely good news - the old terminal was really depressing. However many homeless people used it as a place to be out of the rain and cold. It had plumbing they could use and was safe. In that regard, I feel sorry for those poor folks.