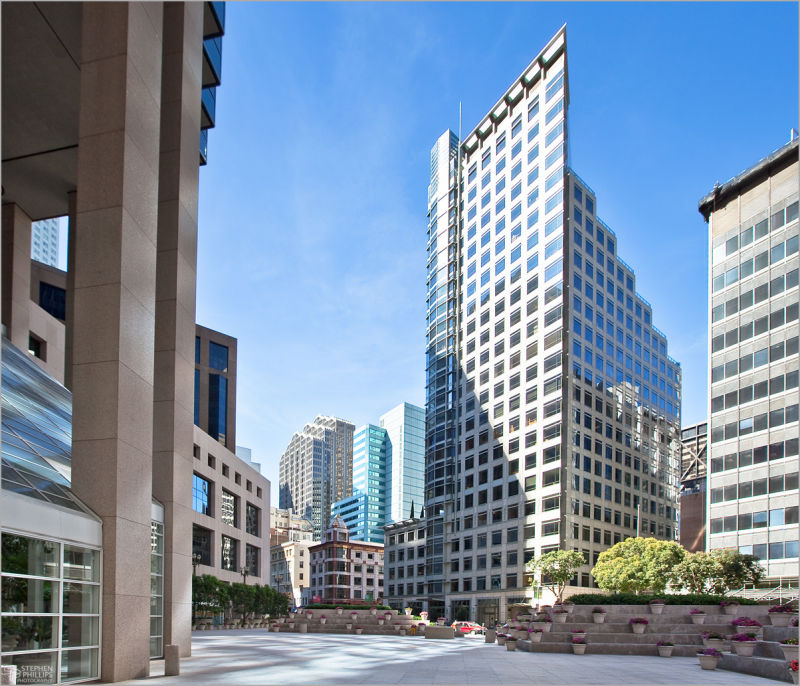 The plaza at California & Davis Streets

This is so beautiful and the perfection of the image resembles
an architectural model or painting. Superb work.

Wow, what a collection!

Ehat a fantastic building with this sharp corner!

Great shot. Tilt-shift or post processing? The flower pots are great. They add a bit of humor to the image.

@David: Hi David - thanks for stopping by. I have a tilt-shift (17mm) which would have been great except it wasn't with me. Here is the Canon 16-35mm at 16mm. Distortion correction in Photoshop.

Superb shot! love the design of the building...
the flower pots adds to the effect...

@Denny Jump Photo: Thanks Denny and Go Giants! The Giants and Phillies were 3 - 3 this season and both finished strong. This is THE post-season match-up and should be a great series. All four of our games with Atlanta were one run games (1-0, 4-5 in 11, 3-2, and 3-2) - and this seems to be the way for this club. My nerves would be a mess but I actually wouldn't mind seeing this next series go 7 games...

Very interesting architecture... I like this kind of buildings. Have a lovely day Stephen :)

Hi Stephen - This is the matchup I wanted too...I love both teams...gtowing up in Roseville we were always Giant Fans and my son lives there now so I am still really jazzed that they are in..had the opportunity to see Lincecum first hand a few months ago - awesome. Then, wehen we moved here from San Diego 3 years ago, I will be honest, I jumped on the Phillies and Flyers bandwagons - I was very impressed with the Phillies hustle, no jerks on the team, just get out there and play - just like the Giants..Philly fans can be tough on their own team as well as the visitors, but the fans crack me up..they just want their teams to play well...can't argue with that, but they can be mean and nasty absolutely...So if it is at all possible, I will be simply trying to enjoy the series but sentimentally I gotta go for the G Men..Regardless I hope it goes all the way - It really should be an awesome series.

Nice looking buildings. I especially like that sharp edged one. Nice light and reflections.

Wonderful clarity, and such cool architecture there, some cool reflections also

this is crazy fantastic! A geometric heaven!

What a beautiful plaza, and I agree with David about the pots.

@Ralph Jones: Those pots are really large - there were five folks in the plaza and I wanted to get them in the shot for scale. I guess the tripod scared them off - it didn't take long but they were gone...

Impressive skyline. We wanted to see your fair city in the light of day, but it didn't work out.