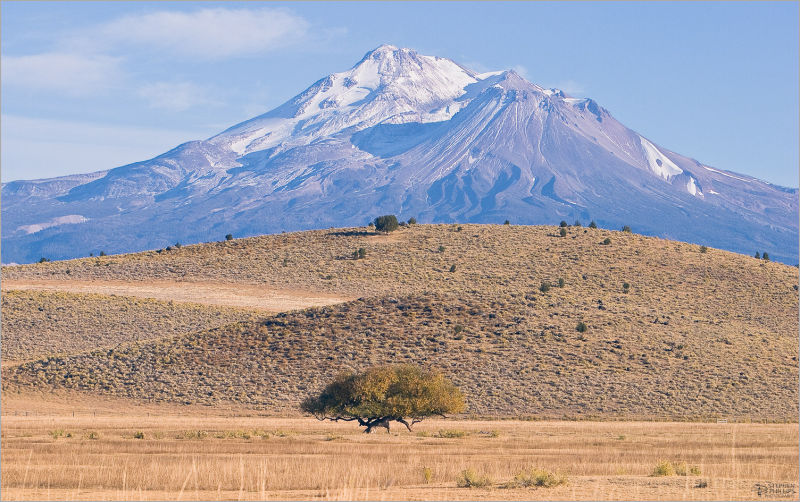 An archive image from 20 November 2006. A date well into what should be Northern California's rainy season and Mount Shasta still stands bare - waiting for her cover of white snow. It is the beginning of what will be a three year drought in California.

California receives almost all of its rainfall between mid October and early April.

Mount Shasta creates and feeds the headwaters of the Sacramento River - California's largest. Seeing her this dry in late November is never a good sign for the many farmers to the south.

Magnificent! I like the composition of this photo, its colors and the leading trees which give life to this grand site

Ah, yes, I can fully understand why this is a favorite . . a superb blend of technical excellence and that timeless elegance mountains seem to have. The strategic tree(s) makes it for me !

Matching point of view and composition, very clever !!!!!! Makes for an outstanding picture.

Wow... what a fantastic landscape ! Excellent Stephen ! Have a nice weekend :)

Great Picture.
One of my favorite drives when I was driving OTR (over the road) was the I-5 corridor.

Wow! What a beautiful landscape!
Love the composition and the view..

What a beautiful, if not dry landscape, and a gorgeous tree in the foreground.

Just a magnificent shot Stephen.....how's the drought situation out there now? Hope better than it was back then.....

wow! fantastic landscape! i like you perspective and composition here - the view builds up nicely towards the peak of the mountain with excellent sharpness and detail all around!

nice capture. at first, I thought it looked like something out of Africa.

A lone tree, a lone mountain. What a powerful image.