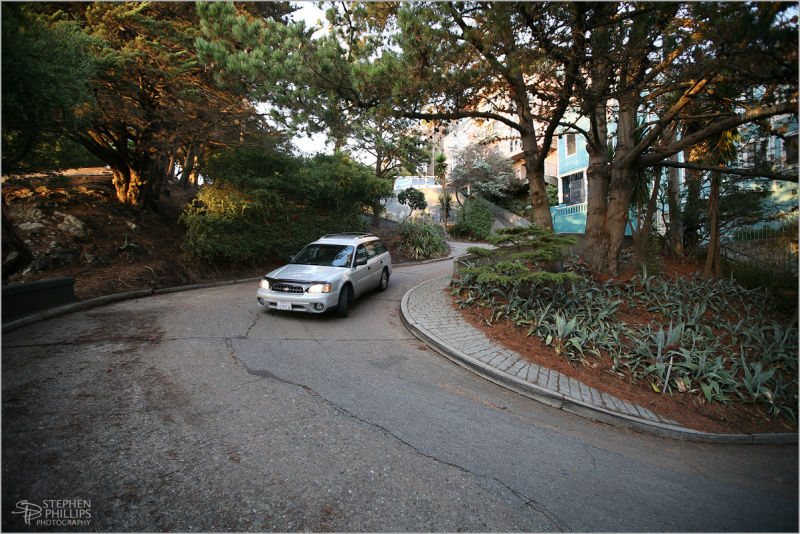 Yesterday's post was of the top of the Crooked Street - Lombard - in San Francisco. Today's image was taken in 2008 and therefore conforms to my archival theme this week. And lord knows I need to conform (?).

This post was inspired by our friend Denny (Denny Jump Photo) who was asking about this two block section of Vermont Street in San Francisco. He asked the question - if Vermont should not be considered the real, "Crookedest Street in The World?"

Answering this question is not so easy. Vermont Street is longer than its fancy and famous sister street, Lombard - over there on Russian Hill. But Lombard does have one more overt turn (4.5 compared to 3.5). However - Vermont street's arcs are wider and cover more distance - and the street goes into a really nice bend at the end and doesn't fully straighten to the grid for several hundred yards after the hill. So I would vote for Vermont.

Another nice thing about Vermont Street is that it is forested and shady - but the surface is asphalt as opposed to fancy bricks and there aren't million dollar homes alongside. The gardens aren't lush and groomed by city maintenance workers. On the other hand - there are no tourists gumming up the experience of driving down and then standing around with their cameras so you can't get off the hill. Every time I've taken people down Vermont Street they've loved this 'secret' crooked street.

Sure is a magic about those streets . . I remember a local telling me that it gets kinda lethal in snow but that falls only once every 30 years or so !

@Ronnie 2¢: Not even that often to where it sticks to the streets. I have lived here 40 years and have seen snow covering the grasses - especially on the hills - but not to the point of being concern for traffic or walking on the sidewalks. I have seen a photograph from the late 19th century of snow covering Market Street down to the Ferry Building (sea level). The clue to the date is that the rail cars were being drawn by horses. That would present some unbelievable problems today - at least until it melted. SKI California Street!

I loved when I seen Lombard in S.F. This is just as beautiful tho needs some
road work. Wonderful photos of your amazing city.

This shot is very well composed! It is nice to get a local angle from a true local citizen. I noticed that the sidewalk on the inside of the curve just ends-- are pedestrians just on their own from that point? (:o

Bravo and well done sir! I see your point as you so artfully have explained. David (my son) will be delighted because he loves facts such as yours that are legitimate, relavant, and salient.. as oposed to the "facts" spewed by certain venoomous "ranters" on tv (whom shall remain anonymous)...But I digress...Excellent job here sir and thank you for clarifiying the issue...I totally see your point - nice job, Stephen - as always!!! DJ BTW Go Giants!

what a nice street, cool shot

How did I miss that place???!!! something to look forward to!

OK I can see where driving a mile or two on this road might be a workout.

This is a fantastic one, Stephen. And a beautiful place indeed :)