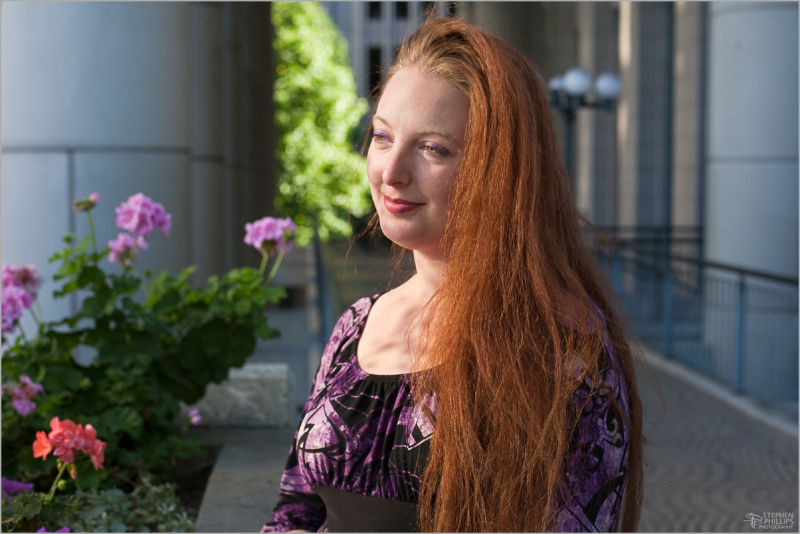 In 1983 The Federal Reserve moved to a state-of-the-art new building at 101 Market Street.

Anyone who is seriously familiar with San Francisco - would recognize the patterns in the floor-way behind Lacey here. This is the circular brick design of the Embarcadero Center buildings. Six city blocks display this brick work on public terraces that range from three to five floors - as do the office buildings located here which rise to 32 floors and the 17 floor Hyatt Regency of San Francisco.

We are three stories above Battery Street. Columns of the old Federal Reserve building are behind Ms. Field. It is one of those massive buildings that would seem completely at home in Washington, D.C. The Doric columns seem out of place in San Francisco.

The architects who designed Embarcadero Center seemed to understand this and I love that you can now walk in the air up above and through what was supposed to be an intimidating entrance to the government's piggy-bank.

Here is a view of this place I posted last December. We are up where the umbrellas are at the right end of the overpass. You can see these columns on the right as well:

[tomorrow]: another Lacey image from this same early evening shoot.

the light is fantastic! gorgeous tones

Lovely Lacey with the gorgeous red hair.....
Yup, I recognize the brick of the Embarcadero, though I didn't know it encompassed six city blocks.
Interesting information. I used to get to SF frequently, but haven't lately and I miss it.
I'm always happy for your excellent SF images.

@DULCIE: Yup - this area from Sansome Street to Battery, then the four Embarcadero Towers from Battery to Front, to Davis, and then Drumm Street to Embarcadero Plaza, and finally south to include The Hyatt Regency.

She is so pretty.

What a great light ! Morning and evening are definitely the best moments to photograph... Very nice portrait Stephen, great work ! Have a fantastic sunday :)

such a beautiful hair color

angle of the light works beautifully........thanks for sharing the info too !!!

Amazing light! She almost looks like a statue. So still...

Beautiful soft light. It is lovely on her hair and skin.

i love the natural light on her as well, great portrait!

Stunning portrait of this young woman who seems to be from a
different time. The backdrop is perfect also. This photograph
is beautifully serene.

That is a beautiful shot. What amazing hair she has.

Fantastic light on the beautiful hair and splendid smile :)