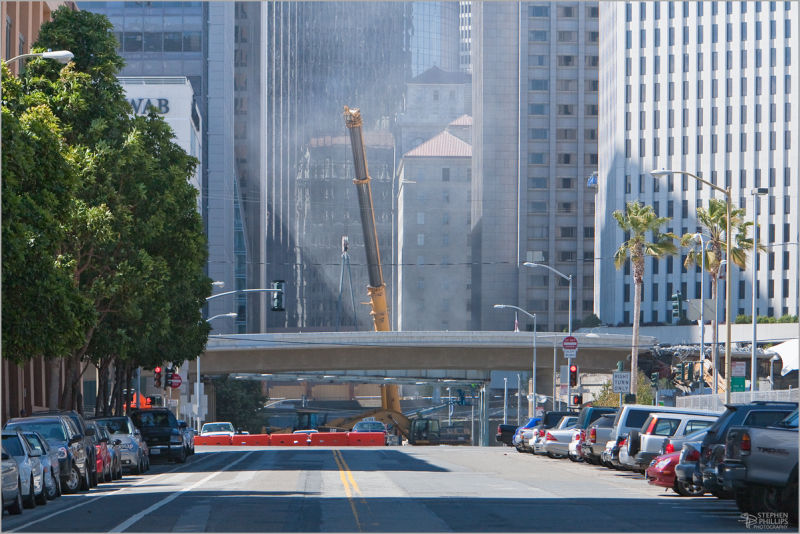 This capture taken directly in front of my office.

Mid-afternoon on Saturday as they hammered away at this off-ramp (August 21, 2010).

Tomorrow - the view on Monday. The street and sidewalks were in great shape - as if nothing had happened. Aside from the small mountains of rubble piled in a vacant lot - it was as if this bridge had never been there. I was very impressed by what they accomplished in just a weekend.

Here you caught the atmosphere of the demolition, let's see Monday's aspect :)

This serie amazes also because the big contrast between calm/sunny mood and the demolition in process, the dust, the noise we can figure out. Great reportage !

Could you concentrate to work Stephen with all that racket going on !! The concrete dust must have been terrible !!!

Superb work with the dust as it rises and gives some great depth
in the process. Beautiful.

Wow this is amazing Stephen! What a great shot - would you mind sharing your data on this one? Loks like a great long shot with super dof
Secondly, here's a laugher...before I read your text (I swear) I said to myself, "this kinda loks like Beale Stree!" GO figure...Great work Monsieur!

Very imprtessive work.. to think that apart from a rubble piled up, there was no other signs of demoloition...
Nice capture of this demolition..

Interesting reportage, the yesterday one is very impressive...

Looks like they just get on with it without disturbing too many neighbours.

@Curly: Hey, Curly. Actually - this part of the transit area is designed to become heavily residential over the next decade. It seems they decided to make all of the noise first and then invite people to move in. How completely sensible.

OK thanks Stephen - yes wow great depth and a very nice zoom sir..cool! I used to work for a company located at 50 Beale whose name will go unmentioned. In the 10 years I worked for them, I actually never set foot in the SFO office!!

@Denny Jump Photo: Ah, let me hazard a guess - does your former employer rhyme with 'Bechtel' ?

I really like the change in point of view in this shot. It is a bit an attention-getter after the closer views of the earlier photos. Nice!

I figured you would guess not that I am admitting this to be the case, however. :-) nuff said - That employment ended decades ago, quite literally

great location, near the heart of the financial district! nice capture!

I'm hoping the "haze" was the dust from demolition, and not anything permanent......