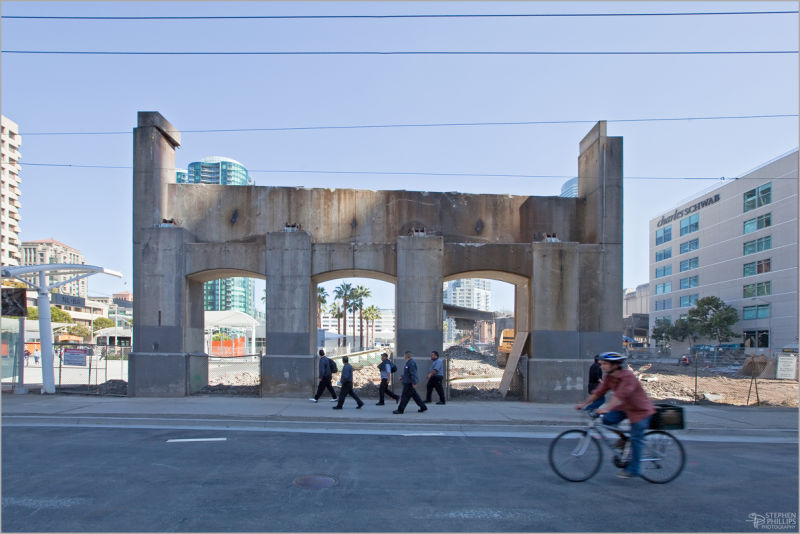 My office building is the angular monster that can be seen in the next block through the top of the arch at right. This explains my interest in this little project.

This support column lords over the new temporary terminal. As I post this - nearly two weeks later - it is still there. Perhaps it is to be incorporated into a shrine of some sort?

[since posting this series - this monument was jack-hammered into oblivion. Gone. Kaput. Nada. And the beat goes on...]

so you are getting a close view, cool image

This kind of demolition in a city is always difficult to see, a part of the life of front leaving in smoke...

Sorry I´ve been absent for so long Stephen but that summer cold realy hit me hard.I´ve flicked through all the images I´ve missed and was very happy (and a little sad) to see this series still going strong !! A little piece of history is now almost gone forever...

Will from Gainesville, United States

That's why I love photography. capturing moments in time:)

Agree with Will, after demolition, photos would be the only memories left..

The one I prefer in this series

Amazing - we saw this one too. Kind of spooky in a way. Great capture Stephen!

I'm like a big kid too, I enjoy watching demolition teams at work, but don't have the patience to watch the replacements going up in their place!

see, if you hadn't gotten this shot, we'd have never known it was even there !!!

Paul Simon had it right, Susan - "everything put together, sooner or later, falls apart." Here, it just got a little help.

Nice capture to remind us of what will not be any more! Wonderful composition!!!

I guess any new development requires the ugly phase. Nice use of the lines here.