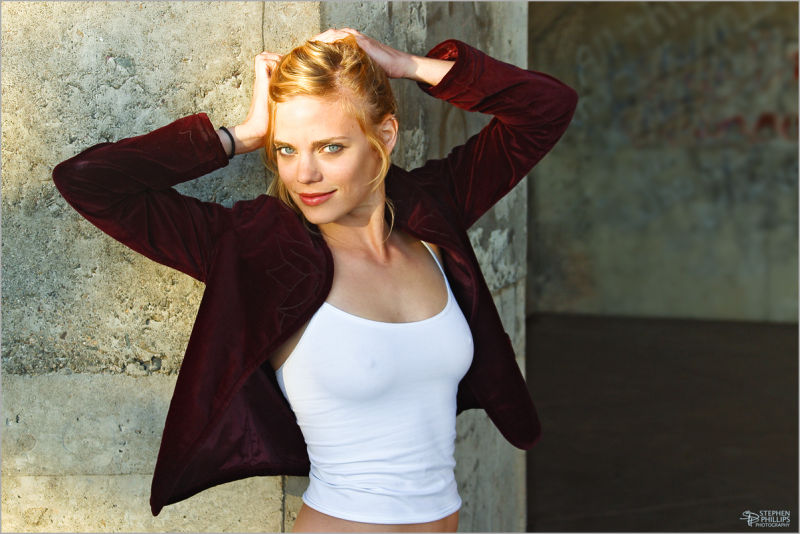 I decided to revisit a few more of the images from the four sessions we produced in 2004. There were so many images that I never managed to get to.

@yz: You impress me beyond words my friend! Molly was the subject of my 3rd and 4th posts here - back on May 14th and 15th, 2008. That second post was from this very series - wearing this same white top. That was well over two years ago and you have a remarkable memory. Here is that image:

Wonderful portrait Stephen. The golden light striking her face is fantastic. You did a great job of posing/directing and framing here.

What a fantastic frame, you seem to develop a great rapport with your models.

beautiful one.
Nice ray of warm light on her intense eyes

Super ! She is gorgeous first of all, and then - this light, and these tones are just amazing on her face ! Excellent portrait !

Golly, that's a gorgeous shot of Molly! The light, the blue eyes, and the blonde hair work magic. Bravo!

Looks like I got back just in time.
Drove right under the Metro Transit Center when we were there - I was telling my son about your series. Molly has a dangerous expression - great pose and expression to match. Nice job as always sir.

@Denny Jump Photo: Thanks Denny - more images around the terminal project starts this Saturday. My best to you and your son.

Wow, Mollie ... interesting the sun on her face

Like everyone else, I love the light on her face. It makes her eyes glow, and the power in the glance is amazing. Love it.

@David: Much appreciated, David - thanks

nice posing! love the natural sunlight on her face.

Very nice image, love the light on her face

beautiful shot you got here stephen.......everything about it is just delightful !!!!