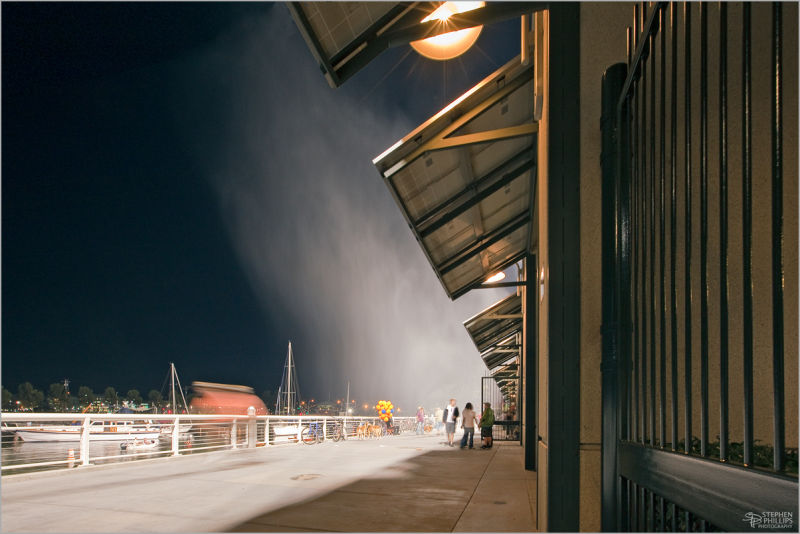 Rain on a Warm Cloudless Night ?

Yup. It happened while Erik and I were visiting the ballpark on that warm Tuesday night a week ago. What could cause such a thing?

The answer is a Giants Home Run.

Catcher Buster Posey of the hometown Giants had just launched a three-run home run into the deepest part of the park.

Whenever the Giants score a home run at AT&T Park - two official demonstrations happen. A large foghorn located above center-field begins to sound. And four massive water cannon located within the right-field archway columns discharge simultaneously. Here is what the resultant shower looks like outside the park along the waterfront promenade.

That bicycler at left was wearing the Giants colors and it looked to me like he had intentionally driven along here just to get soaked. It was still really warm - so why not?

Love the light on the water, very well taken

Great image of the warmth produced by the Giants :))

love the light and the mood

That is weird! But a fine image.

Very nice with this light

Well documented, but I'm glad you were out in it, wouldn't have see through the stands if you'd stayed at home!

This really picks up the atmosphere of the moment . . just like being caught in the rainstorm.

what a beautiful shot! challenging! ;)

Great catch !! Unfortunately, that's a phenomena I missed on my one excursion to that great little park !!!

I can hear the crowd, the noise, the Fzzz of the electric lights, superb vivid & cinematic one again.

totally cool (as usual from you!). i like the atmosphere :)