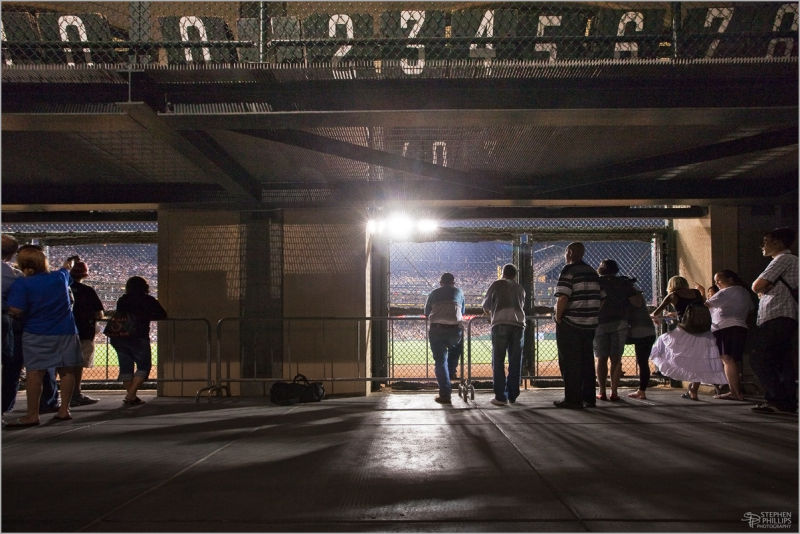 This was the destination of our walk- the so called 'Knothole' wall of the Giants baseball park. This is so very cool - a place where folks can just walk up to the Arcade walls and watch the game for free. There is an entrance where an usher screens the fans to make sure there are no alcohol or security concerns.

The location is excellent. You stand just beyond the warning track at the edge of right field. An excellent view of the action as this is the shallowest section of the park.

The only bad thing was that in the short time it took us to walk here - the Giants 7 to 2 lead over Cincinnati had dwindled to a 7 - 5 lead. When the weather gets warm like this - AT&T Park becomes a real 'hitters' park and the Reds are just the kind of team to effect a comeback. We now were nervous.

[ - oh, those numbers up at the top, you ask? - Another charming feature of this ball park is that The Giants decided they wanted to have old-time manual scoreboards to display the status of other games being played that day. So while the main scoreboard is state-of-the-art digital - these outfield scores are manually changed as would happen back in the 1930's or 40's.

The funniest part of this is that the guy actually doing the work is sitting at a laptop computer tracking the scores. He gets an update and goes over to slide the old numbers out and the new ones in before going back to his chair. We will get a good look at this fellow in a few days. ]

TOMORROW - a time-out for a special occasion. This series resumes on Sunday...

Thats fantastic, a game for free

You have done a great job with this one, taking the greatest advantage of the low light areas.

Excellent work with the lighting as you seem to have captured the mood of the place which would be the hardest thing to do, given the lighting Superb job.

A very interesting PoV. Cheers for this shot

what a fantastic idea, makes for a great image.. great job!!

Brilliantly composed shot,top marks Stephen !! Did you know that baseball was brought to the United states from the UK and was originaly called "rounders" Rounders is still played in Junior schools in Britain but Baseball has never realy made it back to British shores !!!

The MaJor from TM HooD, Iran

what's goin' behind the scenes

Will from Gainesville, United States

This is classic Stephen!!! The light, the composition, the POV... the whole scene has been brought to life! Love so much the fine details, the scoreboard in particular, that you've delicately captured... they're wonderfully bringing out the essence of the mood of this classic ball park of last century!:-)

my favourite so far of your series of AT&T Park.
Nice point of view but most of it cool back light effect