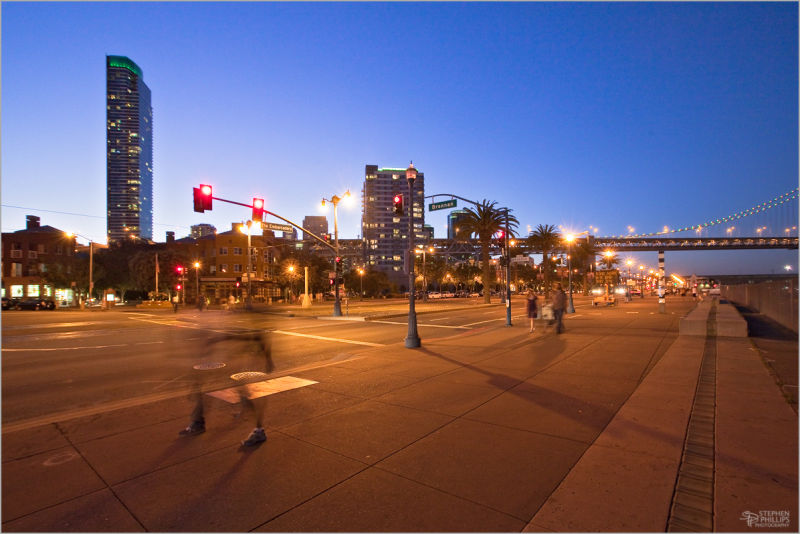 on a warm san francisco night...

The Embarcadero in San Francisco

The beginning of a short series...

Finally - on what has been officially the coldest summer in San Francisco history - we have a heat wave. The past two days have been hot here. A contrast to July which had averaged a daytime high of 63­º (17° c) - a full five degrees below average. August continued the trend with each day mostly gray, foggy, and windy.

The small events of last night inspired this series. My business partner - Erik Reinecke - and I were working late last night, as we do with some frequency. We had the Giants baseball game streaming on our computers. The baseball park is just four blocks south of here.

Just after 8 PM - Erik stuck his head through the door and said to me, "It is beautiful outside - let's walk down to the ballpark while the game is being played." In one of the finest moves ever made by a ball club - the Giants have a walk up fence along the waterfront. It is called the 'knot-hole' wall. There folks can stand under the brick archways and watch the game for free. I had never gone there during a game and instantly said yes.

As we stepped out the door and onto the sidewalk - I was amazed at how warm it still was - and at how many people were out walking around in this mostly commercial neighborhood. Though nearly nightfall - the temperature was still 87º (30.5º c)

Our second place Western Division San Francisco Giants were hosting the first place Cincinnati Reds of the Central Division. The red-hot Reds had been playing excellent ball. It is getting late in the season and each game is taking on extra weight and importance as teams fight to advance into the playoffs.

The Giants had come off a hard road trip in the hot and humid Midwest. They were not playing well during the past week. So it had been comforting on the night before to see then soundly defeat the Reds 11 to 2. This night was the second game of a three game series and they were up 7 to 2 as we headed to the park. It looked like we were well on our way towards another important victory. Maybe.

What a cracking shot, love the people in the shot

what colors for this early night shot.
I love the ghosts that bring so much to the picture

I like very much this photo with the shadows of somebody crossing. Good night photo.

the ghosts come regularly after sunset!

Yes, I, too, must mention those ghosts ! What a wonderfully entertaining image this makes.

A great street image,the ghostly figures are top !! I´d rather watch this photograph than Baseball though,it´s on my list of boring sports that go on too long,together with golf,cricket(the grandfather of baseball) and snooker !!

@Anthony Morgan Lambert: Thanks very much, Anthony - I appreciate your kind words. As to baseball - it has become the only sport I love and follow. I will be the first to admit that without understanding its complexities and nuisances, it would seem dreadfully boring. To me it is the perfect game. There are 162 games in a season and then a full month of playoffs. And still, after all of those games, when the last out of the of the World Series is made; a sadness comes over me that will endure four months until the first days of 'Spring Training'. That's when the ol' game comes back to life.

Beautiful night capture... I like the ghost effect, very well realized ! Have a nice day Stephen :)

Very nice with these ghost people

A picture full of intrigue and puzzle. I refer to the two boots/feet in the foreground, they look as though they belong to the same person, but I'm guessing that there were two. Odd how the feet stayed still whilst the rest of the body(ies) moved during the exposure. Thus giving the impression of someone having a crazy dance on the pavement with their feet nailed to the floor!

We - on the east coast - have had a summer that has been extraordinarily hot. A little 'cool' would be nice...
And - I just love the warm light and color in this. Nice image!!!

cool shot......love those feet, with ghostly bodies......I just love that little ballpark you walked to.....it was the very first place we went, when we came out to san fran.......how nice that you can walk to it, and see a game, for free !!! look forward to this continuing saga.....and if you please, you could send some of that cool weather my direction !!!!

You don't have too many of those do you? I like to froze to death in your airport:-) Love the motion blur.

simply beautiful Stephen!! i tried to leave a comment on this before and aminus was acting funny...! :P gorgeous light, gorgeous color!!! one of my favorite areas of san francisco -- even though i was rarely there... something to do with the openess of the space... and the proximity to the bridge...! faaabulous!

Great light and I love the ghost!

i like the mood and color of sky. warm, eh? we just broke a 20-something day stretch of 100's :) enjoy the warmth, i know its chilly up there in CA. my wife is from LA and although it is different from your area, I have to wear a jacket at night because of the difference of CA to TX when we visit there every summer. i enjoyed your strory :)