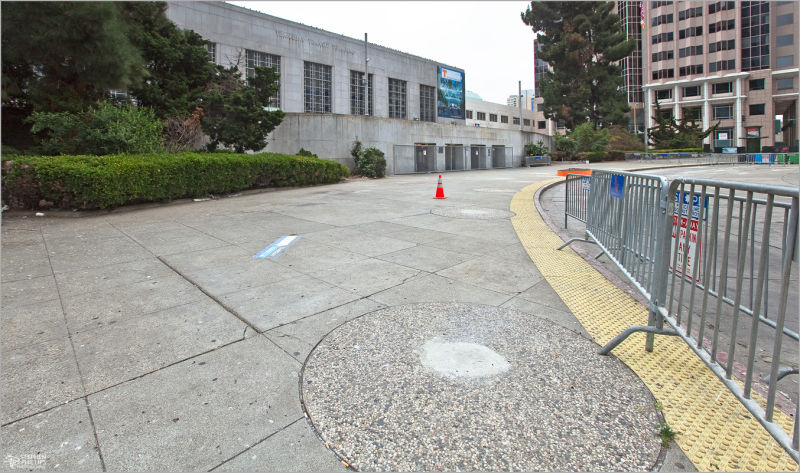 This shows the whole of the front from Mission Street. The electronic 'SamTrans' clock tower is already removed - as is the pathetic old 'Flower Stand' that used to sit to the right of this entrance. Fencing had to be bolted across the front entrances after the closure. In seventy-four years the terminal had never been closed - so therefore, it had no doors.

TO SEE WHAT'S planned for here - click on this link. You will get a 45 second presentation of what's to open here in 2017:

...if you are really bored - poke around. There are many videos and stills of the new center within the site. Actually, these visualizations are really impressive technology in their own right.

...this is the final photograph in this series (for now) - I have a bunch more images of this thing but it is time to move on. Enough for now.

Cool shot, for me the red cone makes the shot

It really seems such a sad demise, the loss of use of this building.

Looks a little more spartan from this side...The whole story is very interesting though and you did a great job documenting this...Very, Very good Stephen. Thank you so much!

Have to agree, very flashy "flash" advertising through that link!
Will the old place be missed when the redevelopments are completed?

@Curly: Hi there, Curly. Except for the homeless who took some shelter here - I can't imagine there will be but a small number of people who will miss this place.

After seeing that cool video of what's coming....I'm not feeling so bad anymore about losing what's there now !! Looks like it'll be another reason to take another trip out there......

Hard to imagine a city building without doors. Can't wait to see what you're up to next!

Great series Stephen...it's sometimes hard to let go of something you've got attached to (even when it's not the best) and progress sometimes carries a bitter after taste...but looking at what's planned , hey, I best start saving to come over in 2017!!!

@Ted: Thanks, Ted - except for the displaced homeless who sought the terminal as a place with plumbing where they could get out of the elements - very few will lament the passing of this place. Today - they've begun to dismantle the approach decks just outside my office. They're using the Saturday - Sunday for the street closure so as to minimize the impact on traffic. It is quite a show.