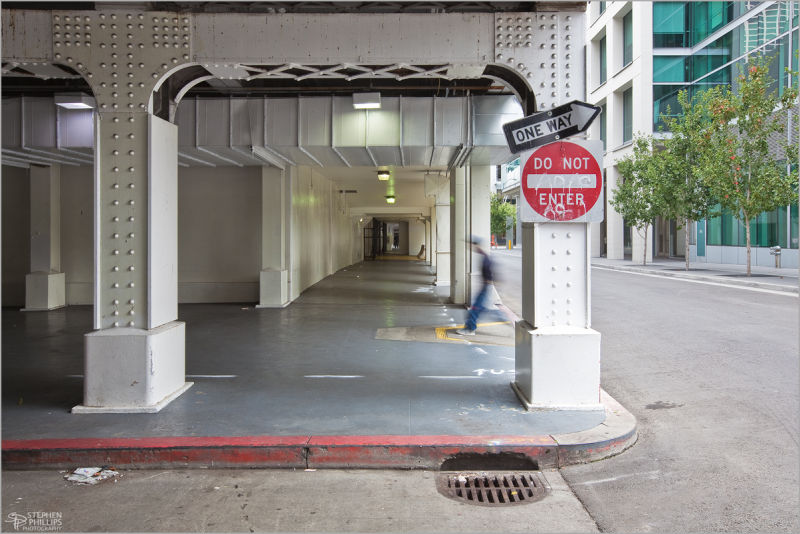 Series from its final hours of operation - VI -

This seems sort of right - a 'Do Not Enter' sign - a bent 'One Way' sign pointing away, up, and to the right. Signs of the times, perhaps. I will note that our one pedestrian intruder seems to be bucking the trend; dressed in blue and moving deliberately in the opposite direction.

This capture shows the durable construction of the building - which was originally used as a terminal for electric trains operating between here and Sacramento. The trains came off of the Bay Bridge and directly onto the fourth floor platforms before completing the loop and rolling east again. 300 trains each weekday.

I have no real affection for this place. It was depressing and heavy and had ceased to serve the city in the manner it once did. Beyond the many bus lines, Amtrak was here, as were tour buses and taxis. There was a very good restaurant and an even better coffee shop. That coffee cafe was operated by a woman named May. She had the best soups I've ever tasted. Most all of this was long gone.

I am sorry that the hundreds of homeless people who used this place to get some rest and have access to plumbing have lost this one tie to dignity and safety. It was the only place they had without being in a government program of some kind.

Good document and comments, Stephen. What it's strange is all this space without graffitti and signs on the walls.

Cheers : I like the perspective, and the blurry walker

I like your compassionate attitude towards homeless people. In SLC some tried to pass a law against homeless people sleeping in parks. I think they failed. I am enjoying your website photos on a laptop, which is better than on my web tv.

@Karen Wall...: Welcome, Salt Lake Lady - this is a pleasant surprise. I just looked at a few of your images from Portland and beyond and look forward to seeing more when I get the time. I agree with your perspectives. We grew up in a time where there were essentially no homeless in our land.

The closure of mental institutions and steady reductions in social services is one of the great disappointments of my lifetime. Reform of those institution was needed for certain. But no human in our wealthy society should be without comprehensive health care and a roof above their heads if they seek one. And to have waiting lists for addiction intervention and care is inhumane - and short sighted as a matter of cost. (yikes - I'm rambling and need to get going). Later...

Great irony captured here. Gotta love a rebel. Sad story, though. There seems to be so many places like that around here, too. Forgotten.

@Tamara: Thank you, Tamara - may your Monday and the week ahead go well.

Well done sir and even more well-spoken. After being ;laid off 4 no 5 times in my life I cannot help but wonder why so many people, especially now, cannot see that we are rapidly becoming a 2 society planet: Haves and Have nots...the race is on and nobody gives a rip about the other. I can only presume that the tp types have never been without a job.

@Denny Jump Photo: Yes sir - the 'I got mine and what the hell's wrong with you' group. Theology suggests we not judge others and that we are only as wealthy as the poorest among us. Yet the advocates of the right continue to attend the ritual Sunday Service charade - steering well clear of the people in the streets and seeing themselves as righteous. The thin line between 'trickle down' and 'piss-on' would seem nonexistent. Have a good Monday, Denny, and be sure to see John Maslowski's comment here - he posted right after you.

Interesting signs Stephen, like the geometric patterns here too. Have to agree with you about the homeless. It's especially disheartening that now we fill our prisons with non-violent people who suffer from addiction and mental issues because there is no place else for them. Society just wants them locked away and out of sight. They are treated less than human. We rescue animals but we let humans lie in gutters and say that they choose to be there. No sane person would choose to live this way. It is not a choice to have mental issues just like one does not choose to have cancer. Anyway, I'm rambling too.

@John Maslowski: Thank you, John - and thank you for rambling back. Anytime.

What disheartens me is in reflecting upon our founding fathers. These men were embarrassingly human at times - but their combined wisdom clearly sprung from 'a greater spiritual power'. They were philosophers and thinkers straight from the 'Enlightenment' and they delivered humankind its most powerful and liberating gift.

To hear the Tea-baggers claim their names has me coil. The architects of our federalized democracy stood against the corporation and the tyranny that was already being thrust upon the world behind to protection of corporate charters. They fashioned of a government supporting its citizens. They saw that as the 'huddled masses' came to join us - it would only temper our strength in standing for liberty and justice. The greatest enemy to all humanity - indeed, to all life on earth - is greed.

The person surprised me. I was looking at the lines into the walkway and there he was.

I love the ghostlike person in this image.

An interesting shot...I love the emptiness of the scene save for that one single figure,
and I like the strength of the wonderful geometric shapes.
Change is hard... wonder what the "new" is that will spring up ....

Stephen, you really need to let your metadata show, so I can steal your settings :) Love the ghostly dude.