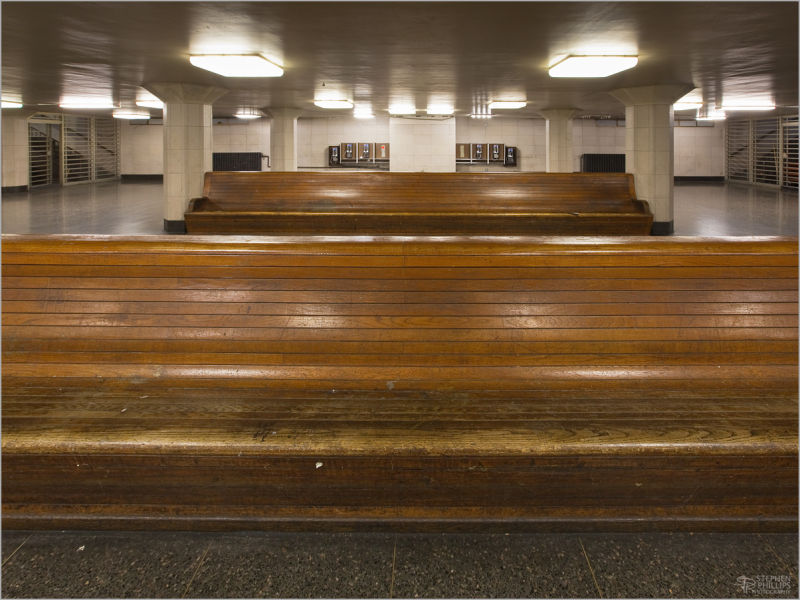 Series from its final hours of operation - II

I couldn't remember the last time I saw 6 pay phones in one location. What's a pay phone?

@Paco Díaz: I think this is true everywhere. Cell phones killed the profitability of pay phones. Most people simply never need to use them.

Nobody coming, nobody waiting-- what is a waiting area.

The world has just moved on,it´s like a scene out of a Stephen King novel... What a great mood you´ve achieved here Stephen.

I bet those well worn wooden benches are a bit more comfortable than today's stainless steel and concrete creations!

@Curly: Four hours before the official closure - it was weird to see this spot devoid of people. In its hey day - the benches would be full and folks would be sitting on luggage and leaning along the walls.

Pay phone?
There is a lot of history in the lines and grooves of those benches, how sad and lonely they look with out people to warm them.

Another wonderful image......great framing on this one....and yea, what are those things back on that wall???

Very well seen and composed . . you have taken the ordinary and made it special. Great stuff.

Great that you captured this before it's demise to the wrecking ball. It's the East Bay Transit Terminal on 2nd & Mission. Street Cars similar to the ones that run up and down Market St. used the lower deck of the Bay Bridge to convey passengers back and forth from this terminal to East Bay. People down on their luck could sleep on these comfortable benches with out too much hassel from the police, between their destinations. The same went for Greyhound riders and buses running to other bay area towns. It was built in a kinder, gentler era that is disappearing fast from SF and other metropolitan areas. The elderly and homeless benifited greatly from a comfortable covered place to sit. Now they sleep in our doorways. As if afflected by some strange tropical disease the American Bench is disappearing at an incredible rate. The virus has not spread to the gold towns in the mountains and foot hills of California, you still see healthy and friendly benches dotting their store fronts, on main streets.