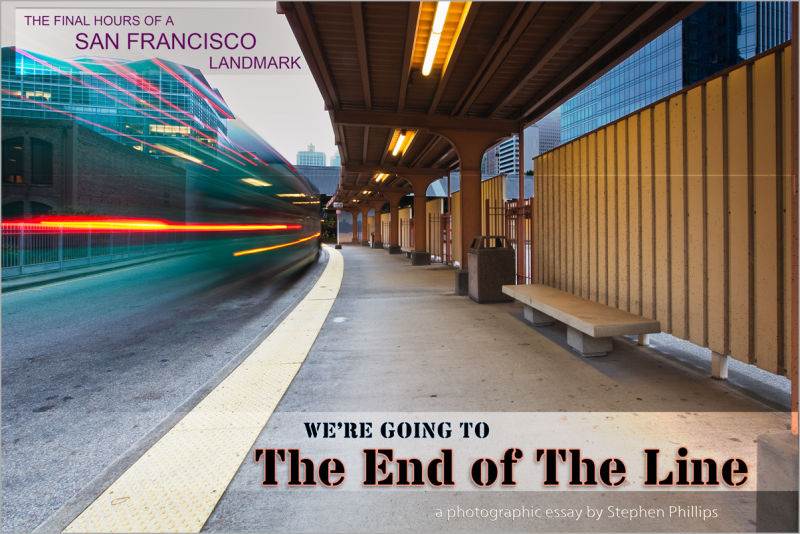 This begins a short series saying farewell to the venerable Transbay Transit Terminal in San Francisco. These images were taken at the end of the last evening commute on Friday 06 August 2010 - and on the following morning.

Opened in 1939 - the center was located at First & Mission Streets (near the western terminus of the Bay Bridge). It was originally built to receive the electric trains that ran between San Francisco and Sacramento over the lower deck of the bridge. Over 300 trains a day made the crossing. The upper deck carried all of the automobiles. The trains were discontinued in 1959. The bridge was switched to its present day configuration - carrying westbound vehicles on the upper deck - with eastbound traffic below. The Transbay Terminal was re-designed to accommodate buses traversing the bridge.

This image is from the last few hours left of the building's service. It will be torn down over the next few weeks to make way for a 80 story complex above a world-class transportation hub - to include a high-speed rail link connecting to southern California.

Always it's a pity to say goobye to these old stations.
Your photo of today is a great one, showing the train as a ghost who never returns!
Very good, Stephen!

Ghost train or a moment in time.. Nice urban desert...

This is a great image.The ghost train fits the story nicely.. It´s just a shame that pieces of history like this have to be torn down to make way for the "future"

I'm a great fan of images of trains & stations, their speed, their mood and here i'm delighted with both ! Nostalgia runs on your tracks, man !

What a wonderful project - recording the last of these historic stations. Looking forward to the series.

Whoa, that one flew right by me! At least you got it on camera...

Looks like we are in for a good documentary here, sometimes I hate to see these old places go (in the name of progress no doubt.)

Beautiful image with the ghost train and the curve of the structure. It also has an eerie mood to it sans any people. Looking forward to the series.

excellent motion - can't wait to see the rest of this series

Pity that they will be gutting the building, but lucky us to have the benefit of this awesome shot !! Nice way to start this essay.....look forward to more.....