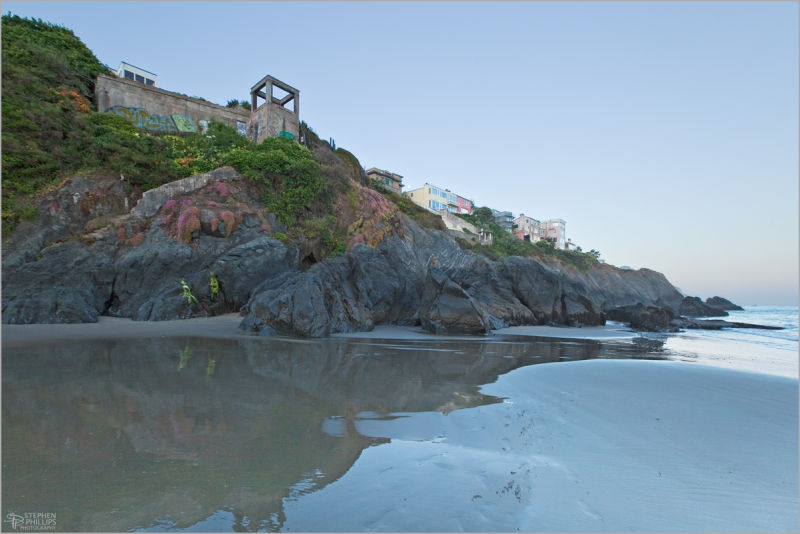 The full moon is about to vanish from view near center. (the larger view shows this better)

Just west of the narrows where the famous bridge spans the Golden Gate - the Gate widens rapidly and the San Francisco shoreline drops sharply south-southwest away from its northern shore. The soft sands along this stretch form Baker Beach - a favorite destination rain, fog, or shine. It becomes a mob scene on those days when it actually gets warm here. The beach affords a beautiful view of the Marin Headlands to the north - and of course - of The Golden Gate Bridge.

Here - we are at the west end of the beach - facing west. The distant rock at far right - protruding from the water - marks the place where 'The Gate' gives way to open ocean. The homes above these cliffs are among the most expensive on earth - the views are breathtaking.

The east end of Baker Beach is designated as 'clothing optional'. It is the only nude beach within the city limits of a major city in the United States so far as I know. Let me know if you know of any other.

Fabulous minus tides occur when we get a full or new moon. During those tides - it is possible to walk below these cliffs. You can see from the darker waterlines on the lower rocks how far up the surf covered this granite just 6 hours earlier. A model shoot is what lured us to this place and time. Our activity was at the far west edge of the beach (and beyond). We were technically in violation of some regulations I'm sure.

Our good fortune was a mild morning with no fog - a somewhat rare phenomenon around the Golden Gate this time of year. We took full advantage - shooting amongst the clams, muscles, starfish and sea anemones. There are also several caves along here that rarely expose their sand floors. We had a blast. I'll post one of our images from this session next Tuesday.

I love the reflections in the water

Well there's always Blacks Beach [aka bareass beach] in San Diego right below the cliff's of Torrey Pines, and a favorite of the camera crews perched high in their golf tournament broadcast towers. Hey Chet...I got a bogey down there. best...jf

@ordinaryimages: Thanks for the report on San Diego's beach options - good to know. My planning staff is on this. Meanwhile, up there in the broadcast perch...

I'm guessing he has a pair of bogeys down there for Chet. Is that David up there in the tower? The Nightly News would have finally toppled Walter with this 'in-depth' undercover reporting. Jerry - have you managed to launch your new web-presence? You have me curious about where you're going with your next chapter...

I can imagine how expensive the homes are there but there again what a view it must be :)

water is a mirror extraordinary !

Lovely ! The reflections are so beautiful... just a mirror ! What an incredible view they must have from these houses. Very nice capture Stephen :)

What this horror in concrete ???

I can see why the homes here above the cliffs are so prized, what a trip !

Only the best for the best:-) The reflection here is really amazing.

The 'texture' of water here is just amazing, love your angle too, Stephen. Dreamy & intriguing

This is a great and rare look - really very nice. Thank you.

Very cool perspective here.......but try as I might, even on the large image.....can't see that full moon anywhere.....are my eyes failing me??

@Susan from Fort Lauderdale, FL, US: With the 16mm lens - it is small, Susan - just above what I'm guessing is the bathroom window of that yellow house just right of center.

Great perspective! I have driven through that neighborhood....Impressive to say the least!

Ahhhhh, now that you've said exactly where it is....I DO see that little dot!!!!! thanks for not making me think I was losing my eyesight, again !!! (a few years ago, at 50......thought i was going blind....turns out, cataracts in both eyes, and bad ones......I'd never even thought my problem was cataracts, cause i thought only 'old" people get them!! doc said sun down here causes them earlier.....2 surgeries, and just like new again!!)

I love the reflections on the water and its a great bit of compo too !!

The little bit of water over the sand provides an interesting version of a reflection.