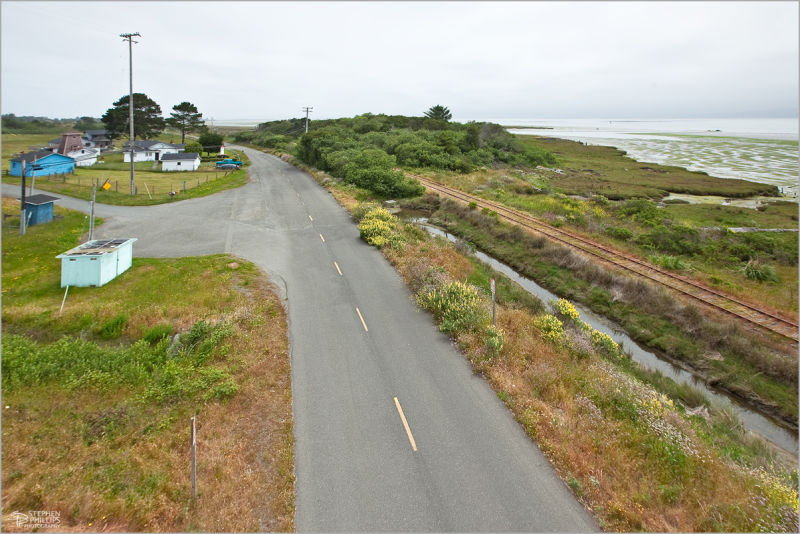 In the late nineteenth century and for most of the twentieth - this small peninsula was lined with numerous large wood mills - turning the redwoods of the region into railroad ties and lumber. The railroad line at right was key to getting some of the fallen trees in and much of the finished lumber out.

Those tracks have been idle since 1992 - when the once great Northwestern-Pacific railroad ran its final train. No bells or whistles pierce the fog any longer - a perfect metaphor to the decline of the timber industry throughout the northwest.

The lumber mills had there own housing and stores - true company towns. During world War II - the lumber mills were all running three shifts at full capacity - and new workers immigrated to the area. Two small unincorporated villages rose outside of the mills. These were named Manila and Samoa - after the towns of the South Pacific - and they are still there. The homes are all tiny and modest by any standard. The cluster of homes in this image is typical. The two towns are so small that I could not locate any census data on their populations at all. My guess is between 300 and 500 people each - Samoa may be slightly larger.

Should you ever visit the Eureka area - you really must visit the Samoa Cookhouse - less than a mile ( 1 km ) from here. The real and actual cookhouse has served three square all-you-can-eat meals each day - seven days a week - for more than 109 years! They've never missed a meal and are still at it! Even if you aren't hungry and don't want to eat - it is an amazing museum. The place is massive and the folks who run it are friendly to everyone who walks through their door.

[tomorrow]: an image from along the abandoned rails

Love this one, the small highway and train tracks give it a nice country feel.

I love the story of this place! I miss going on road trips and seeing all the trains in California loaded with lumber!

I would be a little more succinct...you don't visit this area without eating at the Samoa Cookhouse !!! best...jf

@ordinaryimages: I should have figured you'd have located this place. Now the question becomes - have you stumbled onto the 'slugs' at 'Los Bagels' ? (you've just said good-bye and I miss you already)

wow. yes!! full production in days gone by, intresting history and good picture,
I know similar when I went to visit relations in Canada,

A flat landscape, almost stripped lined by a beach which has to make of kilometers ???

Great narrative Steve, just been looking at the map and Manilla is sure out of the way clinging to that tiny spit of land.
I guess it didn't look quite so clean and green when the sawmills were there.

@Curly: There were two great shocks for me upon my arrival in California in 1970 - at the ripe age of twenty. The first was San Francisco's Fisherman's Wharf - which I had fantasized as wide wood piers with elegant restaurants. I wasn't prepared for the wax museums and the endless array of cheap trinket and tee-shirt shops.

The second shock was Eureka - which I thought I would fall in love with. Driving into that town - the air was heavy with smoke and the powerful stench of sulfur was everywhere. It was ghastly. Today, all of that has changed - and the air is clean. Much of the area suffers problems related to poverty and drugs. With the collapse of the timber and fishing industries - there are numerous challenges. A push was underway to increase tourism to the area, including construction of a passenger ship facility. The long vacant but magnificent Eureka Hotel had been purchased by a developer who planned to restore her elegant charm. All of these plans disintegrated with the global financial collapse three years back.

Much of the region is still very livable and exciting. I love coming to the area and could easily live here. The people are great and there is a real sense of community. Humboldt State University as well as Redwood College are established here. That translates to a lively music and arts presence. There has to be more large, modern, organic and vegetarian food markets per capita than anyplace I've ever been.

Which way ? Each roads lead to a different future.
Have a nice day.

@Jean-Michel: ...and then the third option of staying.

What a super shot does sound such an interesting place

nice shot Stephen.....sounds like quite an interesting place......does the decline of the lumber business, mean they are no longer chopping down redwoods? That sounds like a good thing, to me.......

@Susan: This has been such a profound political point for me. Thankfully - all of the redwoods being harvested are now from 'managed forests' that are using trees planted 60 to 80 years ago - and are being harvested in a sustainable way. None of the original growth trees are at risk to my knowledge. How anyone could kill a living entity that has stood since before the time of Christ is beyond my comprehension.

Thanks for sharing the photo together with the explanation... it seems to be a very interesting place ! I can imagine all these trains charged with lumber, must have been nice to see. Have a great sunday Stephen :)

Picture really tells a story backed up with your narrative here. Fascinating history and all in such a comparatively short space of time.

Only in California do you get roads that hug the ocean like this. Another wonderful landscape!!

I really like your vantage point here. (thought about you Friday night when we spent 3 hours in the SF airport. i sat there shooting people to pass the time)

Beautiful and an interesting story !

All that history just left to rot and be forgotten.It´s more than a little sad I reckon !!