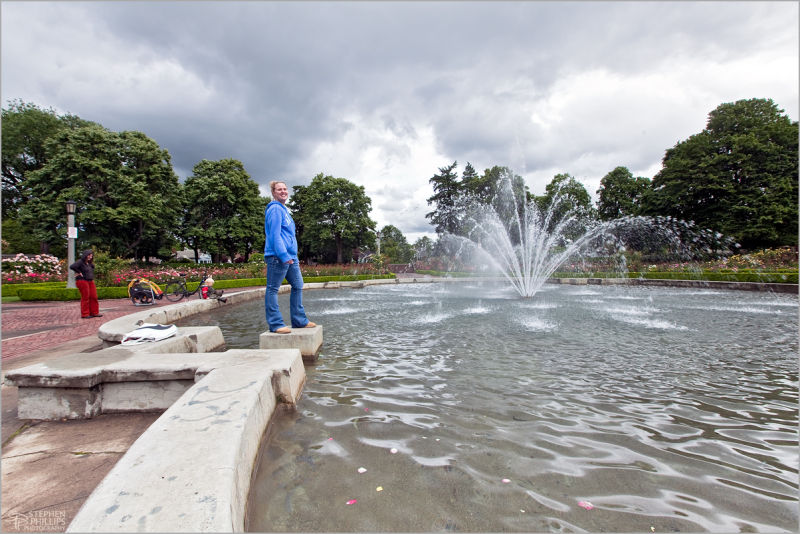 Portland, Oregon calls itself The Rose City. The Portland Rose Garden - perched upon a hillside to the west of downtown has a world wide reputation for its beauty. Many of the city's smaller parks also sport roses - and there are private rose gardens everywhere you turn - even in the most modest of neighborhoods.

Yet nothing prepared me for the surprise that my niece, Sarah, revealed in this charming little area she's just moved into. A large area of small, wood framed homes north of the Willamette River. After lunch (described in yesterday's post) - we drove about a dozen blocks to where she introduced me to the North Portland Peninsula Rose Garden. A formal garden amidst a working class neighborhood. This is a masterpiece of horticulture that could be considered world class in its own right. I was dazzled. A diamond set in brass. Nicely polished brass.

Fantastic image Stephen, and a great composition - I like your placement of the fountain to the right hand side - the sky, as usual, is fantastic!

Nice composition Stephen! Is she going to jump? :)

Great angle you used here. I also may have make a mental note to quote you on "A diamond set in brass".

A superb smiling portrait and a very beautiful composition ! Many things to see in this picture !

A well put together frame with a good lead in.

I would be thrown out, as I leave the walkways and climb into the beds to discover discover about the rose. best...jerry

@ordinaryimages: Hi, Jerry - I suspect you are wrong. First - I saw no one there to throw out you or anyone else - and in the individualistic spirit of the Northwest - unless you were doing something to hurt the plants (you wouldn't) - I believe no one would question your detours to investigation. Joyous (if somewhat cloudy) light...