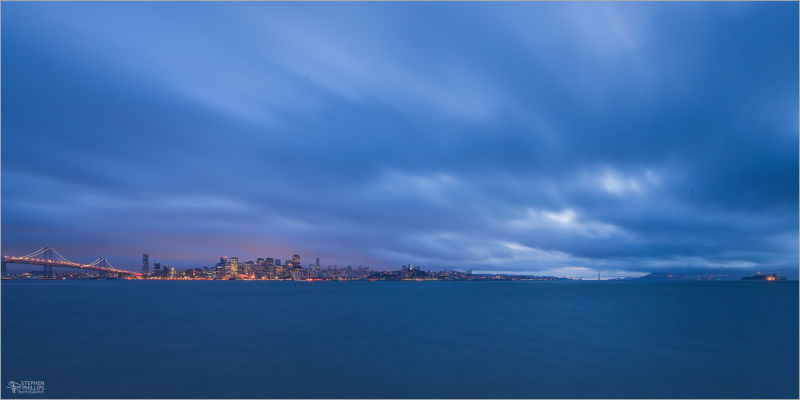 Posted by Stephen Phillips (San Francisco, United States) on 31 May 2010 in Cityscape & Urban and Portfolio.

It seems nearly ludicrous to be posting this now - I just didn't have time to attend to it last week when it was taken. It is sunny and cloudless and very warm in San Francisco this Memorial Day Weekend.

We've had a most unusual wet season this year. Normally, it is dry along the central and southern California coast after the first of April. This year the rains have continued all the way through May.

I was driving home on the Bay Bridge last Wednesday. Another wet storm was blowing in from the northwest. It was windy and cold. It was just before sundown and the traffic was miserable. My view was that standing in the wind and cold with the camera and tripod would be better than inching along the lower deck of The Bay Bridge - and so the exit onto Treasure Island in the middle of the bay. I was rewarded - not only with this image - but also with the ciumstance that by the time I climbed back up to the bridge - the traffic had opened up and was moving near the speed limit - hooray!

Larger view and expanded story can be viewed here:

Blue,blue and more blue... Very blue this one then Phillip :-)

Very beautiful, like the movement of clouds in the sky.

Gorgeous!!! Lucky with this image and the timing on getting through the traffic with ease :)

Beautiful shot Stephen.....gorgeous lighting, and color.....and seems your photo taking paid off......any reason to get out of the traffic, and then even better, to find it's gone!!!!

Wonderful work And thanks for pulling off the road! The lights across the cityscape really pull me into the image and this has a fantastic sky!

Such an incredible picture, San Francisco seems to cling to the bridge as it sinks in the distance.

i have to say I love a good cloud photograph, and this certainly is one...

I love shooting at Treasure Island. We'll have to do a meet-up some time.

Geepers, what type of lens are you using here??? Great image.

@MontereyJohn: Hey John - thanks for the visits and kind words.The lens is my old favorite - the Canon 16-35mm f/2.8 L II. It is by far the most used lens in my arsenal. FYI on the storm cloud image off TI:

Great long exposure. Love the empty space of the smooth sea and sky.