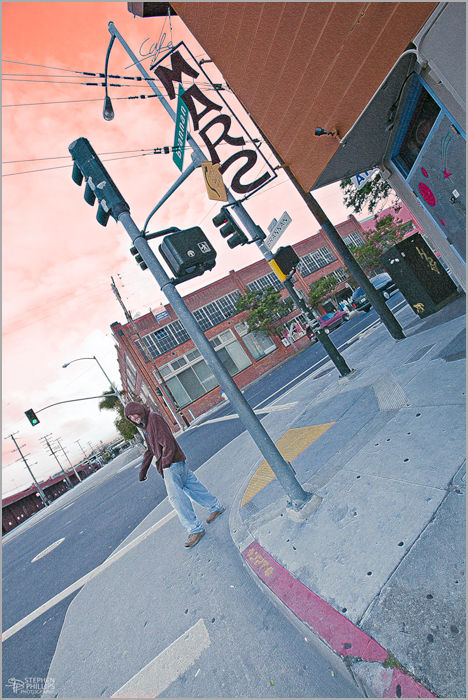 Posted by Stephen Phillips (San Francisco, United States) on 10 May 2010 in Miscellaneous and Portfolio.

You were expecting little green men, maybe? This is Mars. For those who think this isn't actually Mars and that this is just being staged - here is Mars' website -

When I was looking at the image I posted last Thursday I was thinking it seemed an alien landscape and the geometric markings in the freeway concrete appeared like instructions from some outer space civilization. It was then I thought that there was no exit off this highway between there and Sixth Street - a block from Mars. And so this little adventure took hold...

I hope you don't think it easy having this brain between my ears.

Good framing, I like these colors and urban look

haha! too funny! like it!! so long as you havin fun!!
very good shot and angel!!

Today we are really on Mars... no doubt, even the neon sign says that !! :-)
Good serie Stephen.

A movie scared the dickens out of me when I was a kid: "The Angry Red Planet." I love the signage. On one side, the "S" is backwards. From the other side, the "R" is reversed. Clever!

@David: Bouquets to you David for 'seeing' the reverse 'R' and 'S' in the sign from just one side. I saw it as I shot the place from each side (duh) - but to pick up on this from the single image is pretty exceptional perceptiveness - bravo!

A man has to deal with the brain he was given. AKA...the Mars hoodie's. best...jerry

@ordinaryimages: Our fellow with the hood didn't come from Mars - it was closed. But he walked as though he'd come out of some distant galaxy - far, far, away - and might have re-fueled here had the door been open. It might say something about the place to note that they don't open on Saturdays until 9 PM - and they are closed on Sundays.

I like your angle on this - it adds a lot more visual interest for me and the man also! Great work on this Stephen!

The shy color is what I would expect of Mars.

Cool tilt here. I see he's looking at you:-)

I have enjoyed the adventure =D) A good series and fun to follow. I'm glad you didn't keep us waiting too long though!

This answers David Bowies question perfectly,"There is life on Mars" !!!