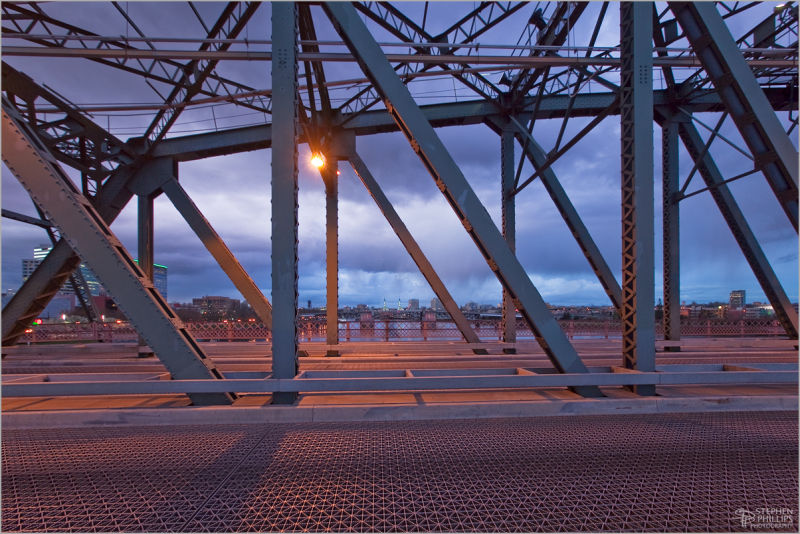 You can see the rain falling to the north. Just after taking this capture - the sky opened up with rain and hail - lots of hail. I pulled my jacket off and wrapped it around the 5D. We ran. The closest business to the bridge is the downtown Marriott Hotel. We jogged inside the lobby - both soaked - and laughing. Photography in Portland. There is a reason that the two big college football teams here are The Ducks and The Beavers.

[notebook]: despite several attempts - there were no more Portland images on this trip. Tomorrow - we will go four days into the future and start heading south towards California. In rain, of course. And a little snow, too - right down to the beach. Much more cold weather than I would have thought possible in April.

Contrast in weather, that's very Canadian lol love the approach and the compo, funny when I drive on rail-bridge, freaks me out ;)

Love the color on this one, Steve.

I really like the view in this shot-- WITHOUT motion blur. For most, shooting at right angles to the axis of the bridge would show nothing but motion blur! The sharpness is so unusual it is captivating.

Such clarity and depth in this, super cool shot, and just in time before the hail, can be painful being caught in that

Quite clever title!! Great light in this shot Stephen......love the tons on the bridge......too bad no other shots from there....but look forward to more of the others......

It is the light and shadows on the flat surfaces that make this one for me.

There was a photobook by Amy Sakurai last year that provides an interesting parallel. best...jerry

@ordinaryimages: Just a few keystrokes brought it up: "Portland - A Love Letter" by Amy Sakurai (2008)
Thanks, Jerry, this is very good. Where do you know her from? This has me looking at the e-publisher she used - Issuu -

Interesting light and texture on the roadway. The glow in that storm is pretty intense as well.

There is a structure in the center of the skyline - two points brigghtly lit up - it looks interesting. Another bridge perhaps? Do you know what it is?

@drphoto: Hi, Dan - thanks for stopping by.There are eight bridges crossing the Willamette River in Portland. Those spires are not part of any of them (good eye by the way). You are looking at the twin glass towers of their convention facility - The Rose Center.

This is a very original place and lighting ! We feel as if under the long legs of some ironesque giraffe !

@ordinaryimages: That is an impressive e-book that she published, Jerry - I gave the site a good long look. WE are about to experience another expansion of the digital revolution. Google is about to launch a very expanded business service - "Double-Click for Publisher's (DFP) Small Business" - From what they've been sending me - it looks like what you'd expect from Google.

I'm really busy through tomorrow but will email you soon. I've been giving the email you sent me this morning a lot of thought and have some ideas to bounce off of you. Best to you and g'nite from SF

The texture from the metall is great, the ligth is the just

I love the color in this.