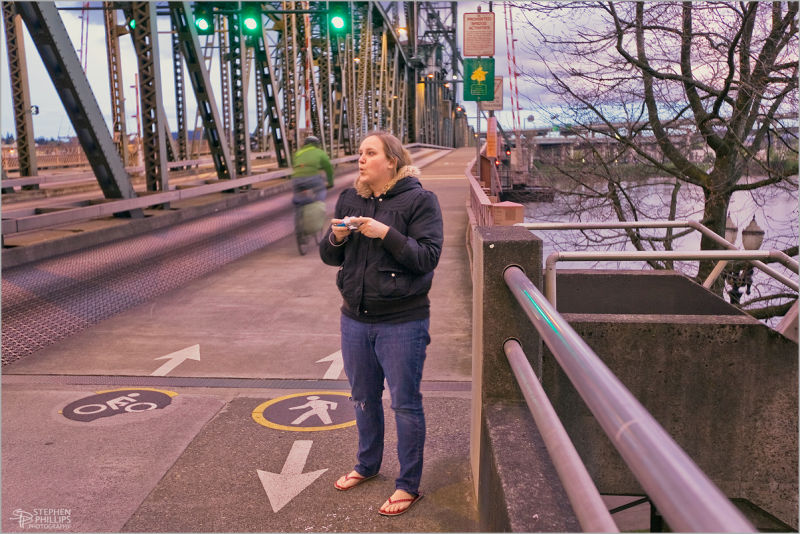 Rebekah on the Hawthorne Bridge

You may remember my niece, Rebekah, from some of our earlier bridge photography in Portland, Oregon - and our twilight adventures at Oaks Amusement Park. Rebekah may well have saved my life here and more than once. There is a huge amount of bicycle traffic over this bridge. As you can see from the markings on the sidewalk - the lanes on the sidewalk are prescribed - bicycles to the inside - pedestrians along the rail.

I would set the tripod and then would start fussing over the camera settings - while Rebekah would yank hard on my collar - pulling my head back in as one bicycler after another whizzed by. I was not used to this arrangement - and the experience was unnerving. Thank heavens the niece was along.

[Photoshop Trick]: The bicycler in this shot was as bright and sharp as my niece. His jacket is electric green and - next to her face - was most distracting. I used the 'quick selection tool' to isolate both he and his bike. After cleaning the selection a little bit with the lasso tool - I then copied him onto a new layer. Next, I applied a motion blur. I experimented with the amount and angle until it looked natural to the incline of the bridge. Finally - I used the hue/saturation tool to remove a good deal of color from his bright jacket and to tone down the lightness. Mission accomplished. And the effect on this element adds now to the image - instead of standing as an annoying intrusion.

I only took 3 photographs during my week here. You will see all three of them - taken right here at the Hawthorne Bridge (this is the first). It rained and then it rained some more. As we walked along this bridge - I was looking at the sky and becoming nervous - as all of my weather bags were in the car - blocks away...

great shot, love the guy on the bike

Great shot. Interesting tip on the technique. Waiting for the entire series to unfold

Very good trick, Stephen, it worked perfectly. Thnaks for yout tutorial :)
Good moment also, I like her taking her own photos. And that paths look dangerous, really.

@Paco Díaz: It is dangerous for those that aren't used to the system. Had my niece not been there to pull my head back on at least one occasion - I would have either been hit or the biker might have wound up having to shoot off of the tall steel curb into the roadway to avoid the impact.

Excellent Photoshop trickery glad that you shared it, some others will learn a fair bit from that tip.

That´s alot of processing for just one bike rider..Hats off to your guardian angel niece as well !!

@Anthony Morgan Lambert: Hey, Anthony - I will confess to having spent a good deal of time in Photoshop - so I have become fairly fluid with its tricks (at least the ones that I know). There was very little time involved in this little patch - well less than three minutes.

Amazing work on this Stephen and I like what you did with the bicycle rider and I like the perspective also! Stay dry!

A coat and sandals. I see that so often and wonder how they can stand it. Love the green lights on the bridge.

@sherri: I'll be certain to ask Rebekah about the footwear when I speak with her a little later. Thanks for the visit.

cool shot......and i LOVe the coat and sandals!!! that's Livin' !! Nice job taking the focus off the bike rider too!!

@Susan: Thanks, Susan - "Fashion Tips of the Pacific-Northwest" - yours here at no additional charge.

Great shot looks a cool old bridge, thanks for the info on the processing, will have to try that

Same fashion tip as down here in S Florida in the wintertime!!! Perfect Look !!!

Nice trick with the cyclist. I like all the green lights in this shot and their reflection in the rail on the right. I think this would have been just as good wihout anyone in the frame!

Kudos to Rebekah for giving you the heads up.

Interesting story behind the photo. So easy to get caught up in the camera!

I have to sit down...to think you of all people, would resort to cheap photoshop tricks...oh dear. All my images have motion blur : ] best...jerry

@ordinaryimages: Cheap tricks - - - Cheap thrills - - - it all depends on which end of the binoculars you're looking through.

The man leaving in motion blur under the 3 green eyes, love it with all those signs

As soon as the temperatures hit 40 degrees F, my students broke out the flip flops! Amazing. Anyway, this story continues to be fun. Thanks for the PhotoShop tutorial!