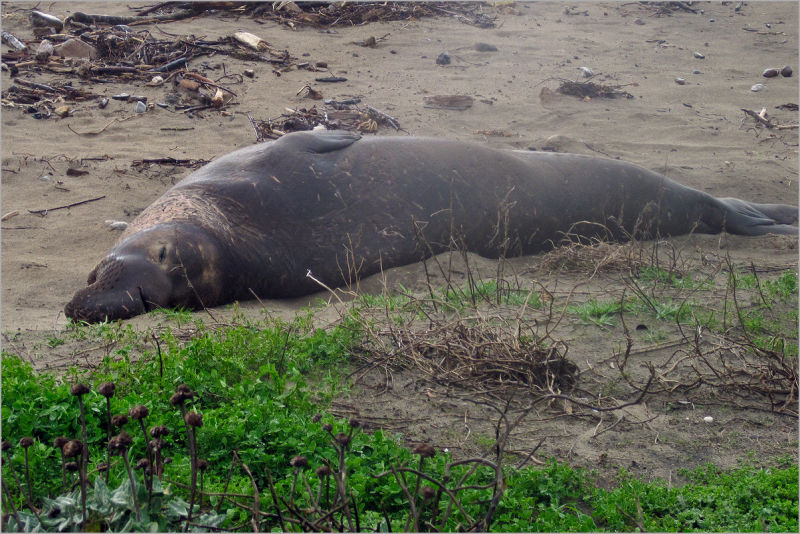 He rolled his head back just a bit - opening his eyes a little and gave a look as to suggest -"oh, one you you things." and promptly re-closed the eyelids. That was all. It was stormy. An adolescent - he isn't yet nearly large enough to survive a challenge for female companionship - so nap time as the rains fell on...

Another capture with the waterproof Canon D10

[tomorrow]: we wrap this series up - just above where we started...

lovely image, looks like his just had his diner and now it's sleep time

At first sight I thought that it was dead! Good shot

Quite a catch Stephen... really a lovely fellow! Like how you composed the shot especially with that green foreground! Wonderful mood!
PS. Thanks for stopping by and leaving your warm words! Cheers m8!:-)

I didn't think they came up on shore like this. Wonderful image!!

Amazing to be able to see one of these creatures in the wild !!

Great capture. He seems to have a lot in common with my cat.

@Susan: They're very common along this section of the coast this time of year. This is the end of their mating season which starts in November. They once were all generally at the shore and islands of Ano Nuevo State Park and it was difficult to get tickets to attend the docent lead tours during the winter. As the numbers of these beasts have grown during the past 3 decades - they are now common from north of the Golden Gate to as far south as San Simeon (Hearst Castle). This was the second fellow I've come close to this month. I would guess his weight at 360 kg (800 lbs). The older bulls can tip 900 kg (2000 lbs).

Stephen....on my one and only trip to San Fran..... I was lucky enough to see a zillion of them, down on the wharf, while we were waiting for the boat over to Alcatraz...... that was back in my film days......and the camera was on the fritz during the entire trip, but maybe i'll dig some of them out, and scan em, and see if there's anything worthwhile......Thanks for putting that "bug" in me !!!

@Susan: A small correction, Susan - what you were seeing down at the wharf were sea lions. They run much smaller than these elephant seals. You might be interested to know that after more than twenty years at the wharf - the sea lions suddenly disappeared before Christmas. It caused a huge media stir and everyone whispering the dread 'earthquake coming' scenario. Well - late last month, they began to return. It seems a good sized herring run off the Mendocino coast was the luring culprit. I can't wait for your return with that 40D. Best ~ Stephen

Don't think a return trip, like my last one, is pending for anytime soon.....If I do get out there again, it will most likely be solo, after I hit the lottery!!!!!

Wow.. what a super capture, and what a clear and sharp image .