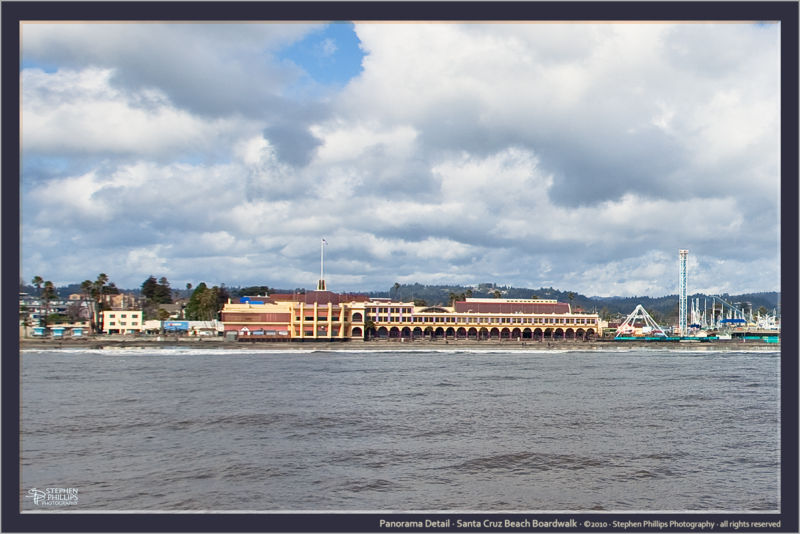 Well - I finally made it down to my destination of Capitola (just south of Santa Cruz) and was nearly late for my appointment. I'd left early and had plenty of time until the camera came out and started leading me around.

After my appointment - I had lunch at Gilda's Restaurant out on the Santa Cruz Municipal Wharf. Gilda's is where many of the locals come for fresh seafood. Today's image was the scene as I finished lunch and headed back to the car.

This is just a detail from the larger single frame - and another example of why I have become so attached to the two tripods I carry. For the full view of this image - go to:

And the panorama was cropped off of the larger frame. Here is the EXIF data:

i feel a trumpet. edited and color prisons’

Was good to be able to see the original, such a beautiful area and wonderful cloud formations

Funny how time seems to distort when the camera comes out. The full version is outstanding, I love the sky!

when i lived there, that was my favorite subject..unfortunitly it was all done in film, and i still need to buy a scanner.

@alex centrella: Thanks, Alex - One of the challenges in the technology revolution is to manage all of the things we would like to accomplish. I love film and would love to see your work in this realm - and the price of scanners is a fraction of a few years back - but the question is about dedicating the time.

I love video and have a darn fine Pinnacle editing suite and a Canon 5D Mk II that functions (I'm told) (I've read) as a splendid video camera. I've had it a month and have yet to record a single frame. Where is the time? With this is the reality of the 'rabbit hole' syndrome as well - once we start a project - we start getting pulled into all of the inevitable explorations that go with the initial inquiry. Suddenly - another week is gone!

"How far down that 'rabbit hole' do you want to go?"

The clouds give great light for this panoramic. I viewed the full pano on your pbase site and it is wonderful. I wish that Aminus3 was built to display panoramics...

@Yonatan: Actually - AM3 does pretty well with panoramas. I'm actually sorry I did this posting this way. I'd have rather posted the pano here and the detail on pBase. It is going vertical that one needs to post smaller here - or the image goes taller than the largest screens.

Hope you had the Crab Louie. I have Final Cut but only use it to build slideshows...as you say...it's the time mamma. best...jerry

@ordinaryimages: No go, Jerry. I pulled into Watsonville and typed 'Lamonts' into the GPS and it came up negative. Typed 'Mexican restaurants' into the thing and turned up a dozen places but nothing close to ' Lamonts'. Any ideas?

Here I really like the positioning of the horizon, with a nice relaxed, deeper foreground and still the lovely cloud cover ... NICE

This is a great post-modern composition all by itself!

Stunning panorama Stephen, excellent details in the large image. Amazing view, love to take photos of boardwalks and you captured this one so very well. Two tripods, that's interesting, I never leave home without one, never thought about two.

Lamont's was a family affair, likely a victim of economic woes.

the panorama is awesome stephen.....and kind of cool to get this view first, and then the big surprise with the full pano.....Damn that camera for leading you around, and making you late!!! Don't ya hate when that happens?????

Picture postcard time,"wish i was here" !!!

@Anthony Morgan Lambert: I love rain and storms. After three years of serious drought in California - this has been a delightful and satisfying winter wet season. It has erased the drought. sadly, the rain we got over the weekend looks as though we may be at the end. The forecast models going forward all show - dry. (Early April is the normal start of our summer dry season. Rains resume in late October - early November)