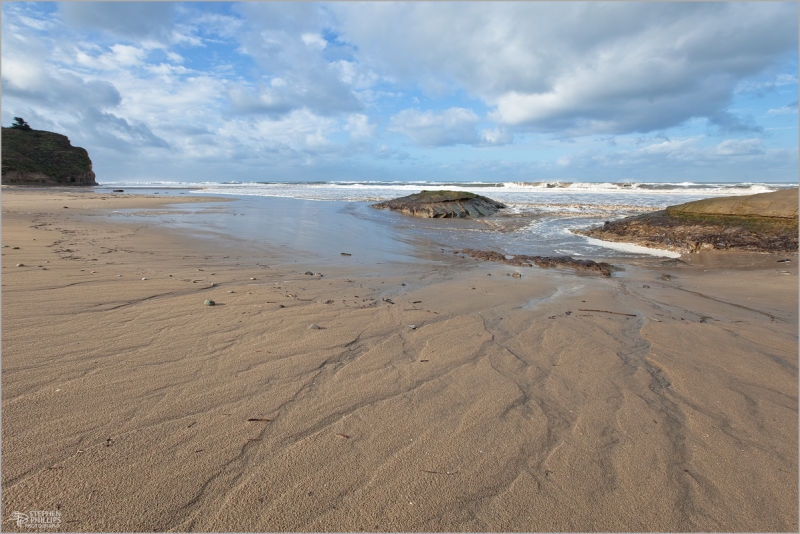 After three years of drought in California - this has been a wet winter. This Wednesday (March 3) had me driving down the coast for the day. Before dawn - it had been raining heavily - but as I started south along the coast - it was simply cloudy. Nothing suggested the dazzling photographer's day that was about to unfold.

The sun began to break through the clouds as I passed the small town of San Gregorio - about 62 km (39 mi.) south of San Francisco. Two kilometers further south - I'd just driven past this beach at Pomponio Creek when the sun hit the ocean breakers. The U-turn was immediate.

Mine was the only car here - I was the only person on the beach. With camera and tripod - I was a very contented fellow...

Honk'in down the Cabrillo...I have never seen Pomponio it was always in the fog : ] Lucky fellow!

Wonderful image. One of my favorite locations.

There is nothing better! A cool breeze, the sound of the sea, lovely light, and the place all to yourself, what a way to spend an hour!

A beach all to youself and great weather,does it get any better.

the light is fantastic - glad you made that u-turn!! I love the lines in the sand and the way they lead the eye out to those breakers.....

What a breathtaking view so beautifully captured, and so lucky to be able to enjoy it all alone without others there

I think you were in the right place at the right time. Looking forward to your entry here tomorrow.

@Viewfinder: Thanks, Glenn - I make this trip at least twice a month and can't imagine not having the good gear with me. As you know - the coast (anywhere) presents unending opportunities for surprises - and conditions can change rapidly. So I try to 'be prepared' on these outings.

Lucky you having that beautiful view all to yourself- AND with a camera in tow! The water tracks in the sand are just lovely against the background of sky and sea.

@Bethany: Bethany! What a wonderful way to start this day - it is nice to hear from you. Thank you. How are you? How are you doing? As to that camera with me - life has taught me to always have a good, working, ready camera nearby. Digital makes this easy.

I can nearly feel the breeze! Lovely one!