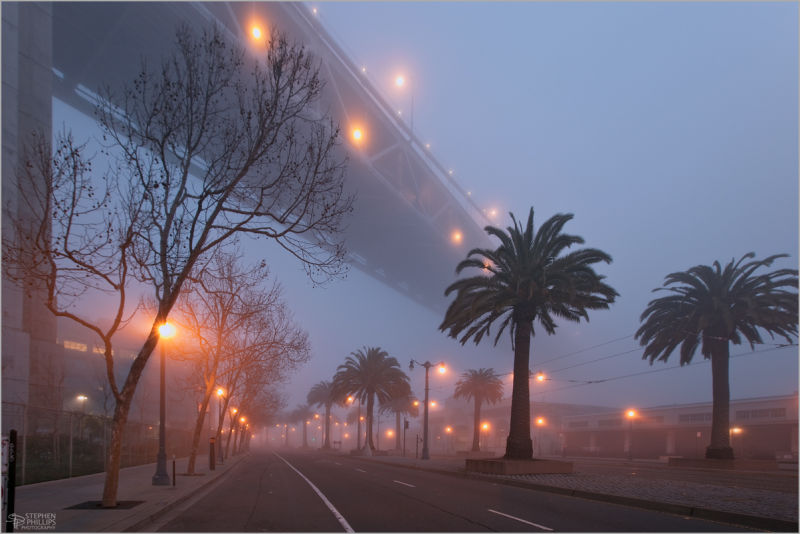 The Embarcadero in San Francisco

This spot will look familiar to those of you who visit here regularly. It is about three blocks from my office. I had just driven across the Bay Bridge and the fog on it was as dense as any I'd ever seen.

As soon as I touched-down in San Francisco - I had to grab the camera and explore possibilities. Yesterday's post was taken from the other side of the bridge - about ten minutes earlier. Here - it is about the time of sunrise. The lights on the bridge were shut-off just after I made this capture.

Another good sequence of this foogy morning :)

love how the bridge breaks in the image and then disappears in the fog
outstanding composition!

This looks almost surreal with the fog and no people to be found.

Wonderful atmosphere Stephen... full of drama! Enjoy how you composed the shot; the bridge is pretty compelling and mysterious - like a "UFO"!:-) Have a great weekend!

Great catch Stephen....how eery looking........just love the mood.....and very cool with palms on one side of the street, and bare trees on the other!!!!

Wow, this is another awesome view. SF is an ever-changing pallette of sights, colors, lights and interesting things. How blessed you are to live where you do.

Like a collection of small bonfires, or beacons, spreading a warning!

I love the way the bridge is lost in the fog. The mist takes away all of the scale-- it could be an enormous structure high in the skies.

Looks great and there is so much of interest in it

It looks like a spaceship over the road. I live in SF and I know where this was taken. Very unique and well done.

Stunning image Stephen, great work with the fog, creates a surreal effect here. Love how the Bay Bridge appears to be suspended in mid-air.

great foggy pic of that bridge with yellow lights

Another great shot with the fog - this also has such a lovely dreamy feel to it. And the bridge disappearing into the fog looks extra special.

The pier looks like it dead ends. Very striking image.

looks like a train is coming from somewhere, there in the far space...very strange ambiance..