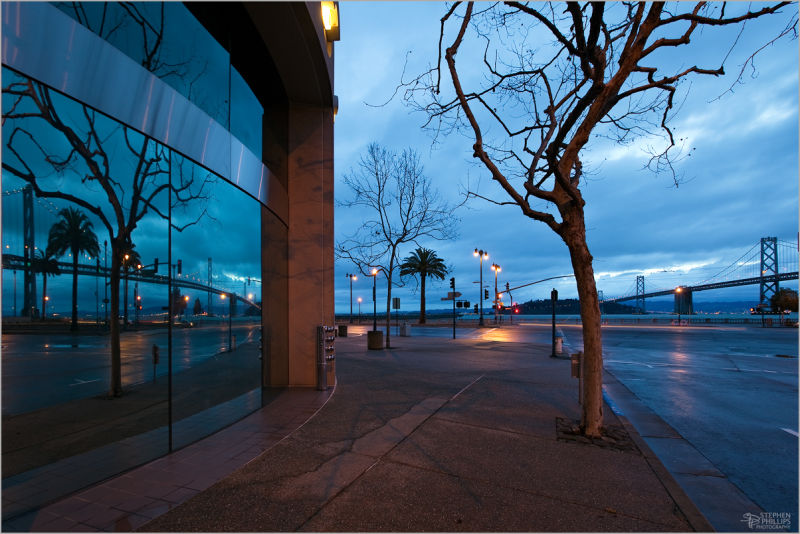 I saw the potential of this image more than a week before getting it. The scene is just a few blocks from my office and so I set my alarm and came down here each day. On one day, the sky was boring - but the major problem was in finding vehicles parked along the curb - blocking the shot. Drat.

I had no idea what would be my fortunes on a Saturday. I was determined to get this image and had to try. The rain proved to be a great bonus. No cars parked - very little traffic going by. Click!

[this week]: Images taken this same morning - except for Tuesday - when Ms. Kat Love joins us for another Tuesday gathering...

The light and morning colors are georgeous, Stephen. And those refelctions... This shot was well worth the efforts.

Great colors and compo. Love it!

great view with that reflection on the window...try one more time if possible with sunshine/-set or -rise...could be magical...

Definitely worth all the effort put in to get the shot!

Nice to hear that other people as well as me walk round storing locations to get back to at a later date to take shots !! The colours are stupendous and the reflections are spot on !!

Your perseverance rewards us all. Maybe I should get a timer : ] best...jerry

I can just imagine seeing this, and deciding you had to shoot, and then not getting the cosmos aligning for your shot for days.....Glad you have persistence......Paid off well!!!

A clean sharp looking image Stephen, the vehicles would definitely had distracted from this stunning shot. Beautiful reflections, great eye, love the perspective.

I really like the long, stretched-out reflection of the bridge.

Very nice, this has a very surreal feel to it sans-people. I find my eye searching for a person in the reflection.

@Ralph Jones: Hey, Ralph - thanks. I had to wait for some traffic to clear. A Saturday morning and heavy rain overnight. I believe managed to keep everyone who could stay under the blankets - right there.

You give us here a great composition with nice colors and very nice reflection. I like it :)
Have a nice day.

Gorgeous! The exposure and tones are superb