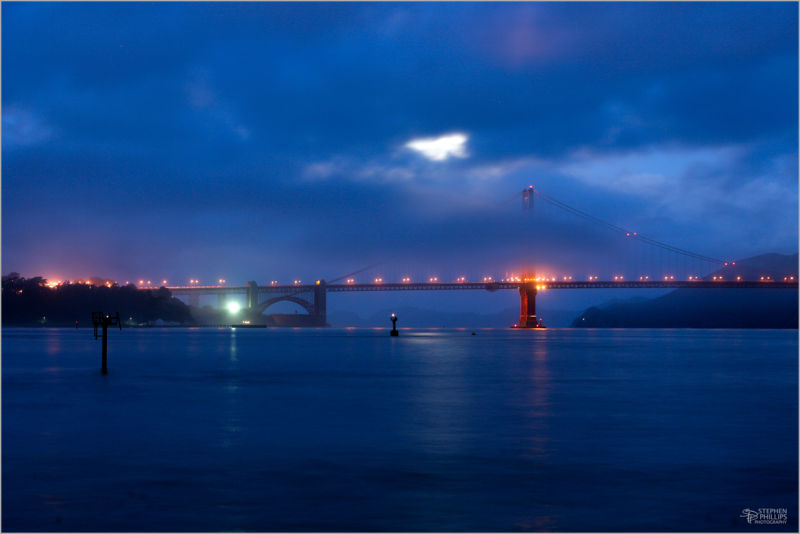 Wolf Moon above The Gate

Saturday's Wolf Moon was on an arc that would see it setting beyond The Golden Gate - and I was chasing it with my camera and tripod. It had been raining much of the night and the moonlight was brilliant through the many broken clouds. I was excited.

Now living in Oakland - I had to cross The Bay Bridge before I would be able to drive across the northern part of San Francisco to get to the anticipated best viewing location. The moon was high above the Bay as I crossed the 'other' bridge. The light was dazzling and my excitement grew.

There was to be some slight disappointment. After pulling into the parking lot of The Saint Francis Yacht Club and setting the tripod - the moon was lost behind a wall of clouds. It would not reveal itself again this night. But it came close - as we see here. The bright moon light flooded the hole in the cloud and lit the waters below. But right after I made this capture - all of the moonlight vanished.

But it was beautiful - and the best was yet to come, more than an hour later - as we shall see - tomorrow.

I like how the bridge is partly in those clouds... Cool light and colors, Stephen.

@MontereyJohn: Hey, John - no to T.I., I was set at the Saint Francis Yacht Club - just east of Crissy Field.

so exciting to be at the right place on the right moment to catch THE pic, and you did it !! so wonderful, 5*

Very beautiful, like the blue tonality who gives a fantastic mood to the scene.

I love those deep colors and the clouds obscuring the bridge - our moon was totally obscured by the snow we had last night......

The Moon is such a tease! I am more drawn to the heavy atmosphere, I think the bridge and the fog would be a constant subject for me. Looking forward to see what tomorrow brings.

The clouds add to the atmosphere. The colors are great.

Very beautiful shot, and I was going to say "don't ya hate when that happens"....but continued reading, and now look forward to tomorrow!!!!!

I never tire of seeing your stunning images of this majestic bridge, Stephen. Beautiful night shot, love the low lying clouds and the reddish tones.

Great light ad a nice description of your photo safari !!

Made me cry. Thanks for the memories, Steve!