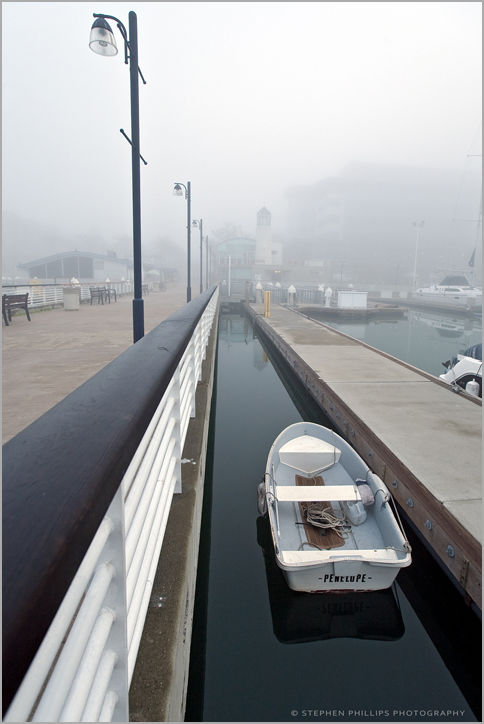 ...secured on a foggy morning at Oakland's Jack London Square - in what appears to be its own small harbor - built to scale. I'll note that Cathy's produce stand which we've viewed these past two days, is just the other side of that building at center. A most persistent fog.

We'll take a break from this series tomorrow - and continue it on Wednesday.

A new meaning to "going for a short sail". best...jerry

@ordinaryimages: Aye, Captain - looks to be a grand adventure.

I hope you were able to just lean over to take this shot: The perspective looks a little dangerous ;-)

@Mirko Herzner: Greetings Mirko. No danger. My tripod has a boom feature that allowed me to fix the camera outside the railing. It was just a little awkward trying to use the eye piece. Ahoy!

Great symetry in this picture as well as cool colors

Foggy days! I'm glad to see your new place images, like if you were taking photographic possesion of it.

@Paco Díaz: Thank you, Francisco - nice to have you back on board.

i wonder how do you get out with that boat :)

how do you get focus like that in FOG for crying out loud???!!! Nice.

@MontereyJohn: Off a good, sturdy tripod boom, John. I'm becoming obsessed with the difference it makes.

Excellent! I like the sharpness of the image that will get into the mist! Superb perspective!

@Mathilde Collot: Thank you very much.

Well spotted,nice lines and the mist gives a great atmosphere !!

Those lead in lines work a real treat here. Just take one deeper and deeper into the mist.

Really like the composition on this shot...i've read how you managed it....sounds too complicated for me...I probably would have fallen in!!! And again, that fog is just perfect!!

wow - I love all those lines in this shot, and the fog really helps those reflections in the water......a fabulous shot....

An absolute delicious fog - so soft, so feminine (hi Penelope), so good !

@k@: So good, so feminine, a cause for celebration - I loved being out with my camera that morning. Thanks, Karine...

A very nice point of view. The result is great

The cool looking fog explains why Penelope is so alone right now. Your perspective on her little harbor is wonderful. It's like.. her personal watery runway and draws the eye deeper into the image without force.

@sherri: A 'boat road' - I like that thought. Thanks, Sherri.

I see Oakland in a new light - as a most interesting place in its own right. I hope next time we visit the area, to see what Oakland has to offer. I like what you've shown us so far. Hope it's agreeing with you, too.

@Viewfinder: Thanks for the visit, Glenn. Oakland is a real American city. Many areas are downright dangerous and it has serious problems. But it is gritty and real and I like it. There is a good deal of charm and sense of community in the areas towards downtown. I love JLS.

I don't have to tell you how much I enjoy San Francisco - but it has - in the four decades I've been around - really homogenized. Wealth has driven out the working class - made rents ridiculous - and reduced the social and ethnic color that define the neighborhoods. This is not a complaint - things change. I just see more 'real life' engagement in Oakland. Portland, Oregon, too - for that matter.

has a great atmosphere to it... i've had dreams like this!