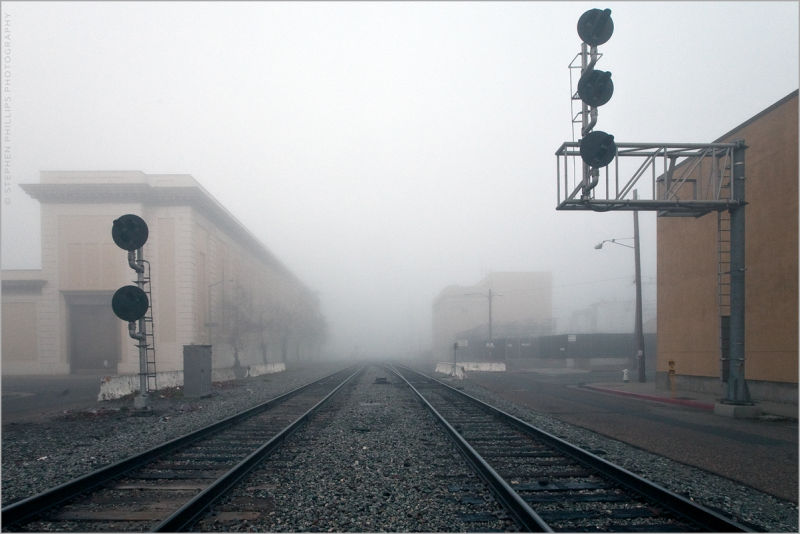 After playing with the freight trains in the darkness - I went and found a cup of hot coffee (I still haven't found the box hiding my coffee maker). From the coffee cafe - I drove out to the shipping berths of Oakland middle harbor. It was too foggy to see anything - so I returned to the neighborhood. By now it was daylight but the fog persisted.

These are the tracks just beyond the commercial area near my home. The tracks here lead on to Sacramento and eventually - Chicago. More immediately - just beyond this point, the tracks enter the secured area of the Port of Oakland. One of the nation's largest and most up-to-date containerized port facilities.

This shot has some depressive "qualities" :-) Those lines leading into the fog... Philosophy on friday mornings... ;-)

What, you weren't mugged? ... just kidding. I was born in Oakland though we lived in Bezerkely at the time. But enough about me.

This is a wonderful image and one I bet I would never have thought to shoot. Nice eye.

cool, love the fog and those posts (or what)

I need more practice with mist and fog, we don't seem to get enough of it here, love the way the lines just disappear into an oblivion.

@Curly: Thanks, Curly. You've dispelled a myth that everywhere in the UK gets unending fog and rain. The thing that most struck me about this image, hit me as I was considering producing it in B&W. All of the colors are either brown or gray to black. After I noticed this - the monochrome seemed unthinkable.

I'm glad you circled back to show the daytime view with that same fog. You really span the bridge of emotions inspired by these photos in having done both night and day.

I like those lines made by the tracks. Cool foggy atmosphere.

like a scene out of Thomas the tank engine ... :) nice shot

I really like this. The fog adds so much to the scene.

The subdued beige is a nice counterpoint to the inky blacks. best...jerry