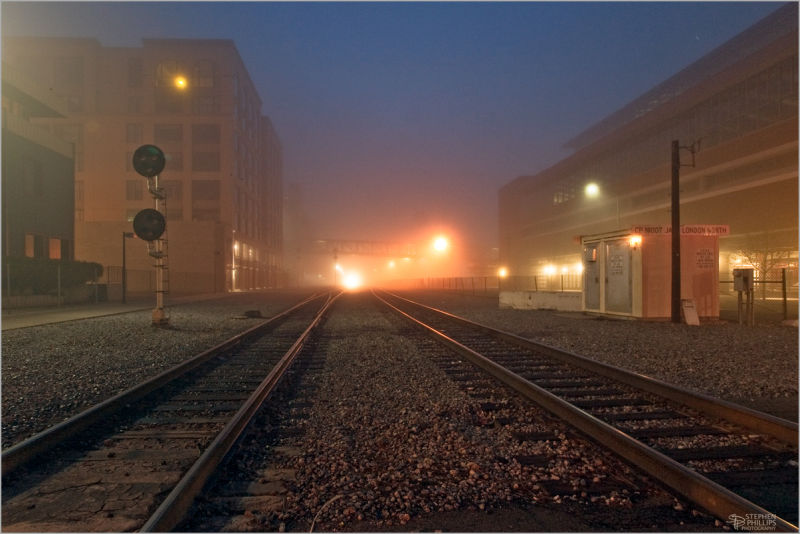 Train Through the Fog

I was out the door before 7 AM on Sunday - headed toward my office in San Francisco, when...

Whistle blowing - a train - coming straight on. I am about to be surprised - drawn by the whistle and the fog and seeing people heading for the station with their baggage. I'd assumed we had a passenger train that would make the stop at the station just ahead to the left.

Freight trains don't stop and this one had me kinda' shooting and moving away quickly. We'll see the freight roll through tomorrow...

In the sodium glow! Heading to the office on Sunday? best...jerry

@ordinaryimages: I've missed more than a month of work with the move and have clients screaming for their images. I fear I'll be indentured 8 days a week for the foreseeable future. (I am not complaining - and grateful for the work)

You know that I am a huge fan of your occasional railroad images. This one is no exception. Wonderful mood here.

Scary stuff - what we won't do to get a photo! This was worth the effort, though!

lovely mood with this light through the fog. I like also symmetric composition, playing with the rail roads

cool shot
but tell me you didn't shoot it on a tripod :)

@yz: Sorry yz - no can do. It was shot atop my trusty Manfrotto. Thanks.

so great railroad pic in fog, have to wake up early to catch such a special ambiance, i love it, 5*

Almost mysterious, almost magical. I really like how the lighting stretches down the track warming it. The fog I think helped carry the illumination. Well done.

i am a favorite of fog images,,,,this is a wow...perfect timeing !

Incredible and beautiful image! I wonder if the train is coming!

This realy oozes that early morning feeling !! I´d love to see a shot of you jumping spritely and light footed to one side as the train rumbled on by :-)

@Anthony Morgan Lambert: Hang in there Anthony - your wish shall be granted in a matter of hours... (and thanks)

Wonderful shot Stephen, I hear the train blowing its horns, and even with impending danger you say... just one more shot... and another.

A very cool atmosphere in this fine shot.

The thick atmosphere is the first thing that I noticed, but the subtle colors really anchor this photo. Excellent early-morning light.

Oh Stephen, this is such a beautiful shot with a wonderful cinematic feel... still and dynamic, charming morning fog and air of tension... your perspective, composition and rendering are just perfect! One of my recent favourites!!!

Wonderful shot, and I really don't know if I'd have the nerve to stand where you were, with that train approaching....no matter how far it was!!!

it's dangerous position!
but it's a great shot!

Great shot! This scares the heck out of me!!

Wow, this is a truly nifty, "swifty" and downright scary shot. Glad you came out of it victoriously! :-)

Good moment and ambience, but a dangerous one, don't be so playful :)

Be careful around trains!!!! My goodness! Bad boy! lol
Well, the image is incredible but don't do this again! ;))

@Magda: Sorry, Magda - I was at it again yesterday. You can't keep me off those rails. I promise to stay alert and take care. I'm deeply touched by your concern (even if you were lol).