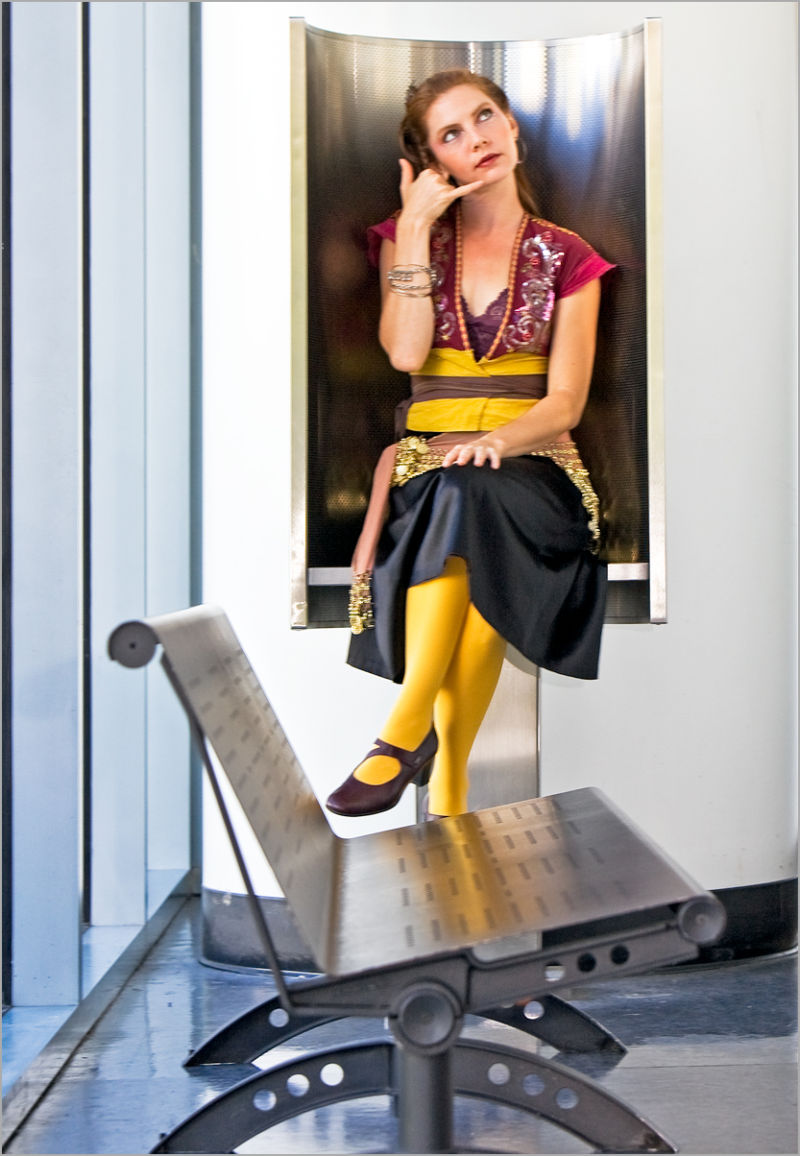 I know the image isn't quite sharp - and here's why:

I managed to have us thrown out by security right after I made this capture. The phone had been removed from this station (another victim of the cell phone revolution). Jesse and I were just walking past, when suddenly she jumped up onto the base of the thing and struck this pose. I managed the shot but found myself near doubled with laughter. This got the attention of a couple of security-blazer types that told me I could not photograph on the premises without written permission.

Both security intruders were female and I would have thought they'd be more gracious at having a colorful gypsy speaking to her pinky finger - listening to her thumb - - - but Noooo...

I just revisited this shoot and realized that there are a bunch of images here that need to find the light of day. Victims of my needing to attend to clients' needs, no doubt. Well - I am grateful for the clients and for Jesse. I'll post some more when I get the opportunity.

[Tomorrow]: begins a series of images taken last Sunday - I emerged from my new home into a dense fog. What follows over the next several days is a different look at Oakland's Jack London Square - all taken that morning...

What a funny story behind this image, Stephen. Considering the circumstances this not-so-sharp example of photography might well be shown here :-)

hehe, funny shot, and what a cool dress

once again, no complaints - she looks pretty sharp to me! (...don't you realize you're not supposed to take photos anywhere, anytime, anymore? i think we're all going to end up in international photojail someday!)

The planet is full of killjoys these days Stephen!

Like the spontaneity behind this shot ... and she was wearing pretty cool colors and a cute expression too!

nice composition on this portrait stephen. great backdrop for her!

very clever and colorful image - such a shame that your laughter made it blurry and that "the fuzz" wouldn't let you continue......

@Chris: Oh well - I've learned to accept what happens for the most part. Look at the bonus - - - it made for a good Tuesday posting and tale!

Spontaneous moments like this are good for a lifetime. This is a great (if not sharp) photo of having fun at your work - both you and Jesse. The story line only makes it even better.

I can't believe they tossed you out!! What kind of place is the Metreon? It's still an adorable shot of her.....It may not be perfection, but it sure gets the point across!!

@Susan: Hi there Susan. The Metreon is an enormous cinema, Imax, restaurant, and entertainment complex two blocks south of Union Square in downtown San Francisco. It opened about 10 years ago under the Sony brand. Sony still has a store there but the center is now run by AMC / Lowe's.

What a charming photo. I love the pose, the attitude, the humor, and the color.

What a live wire! best...jerry

This is really cute. I love the yellow stockings and shoes.

allo, Jesse! Happy new year!
Funny shot, Stephen, I like it a lot :)

It could have been worse, but the written permission claim is pure bullshit. Here's from an article in USA Today:

And yes, you can shoot on private property if it's open to the public. That includes malls, retails stores, Starbucks, banks, and office-building lobbies. If you're asked to stop and refuse, you run the risk of being charged with trespassing, but your pictures are yours. No one can legally take your camera or your memory card without a court order.

@Twelvebit: It is so good hearing from you. Thanks so very much for this Andrew Kantor column. I've copied it and will carry a copy with me. It is well past my beddy-by time but I wanted to thank you and acknowledge your extended visit before conferring with the 'other side' - g'nite John - and joyous light...

This page of rights by an attorney is what I carry with me.