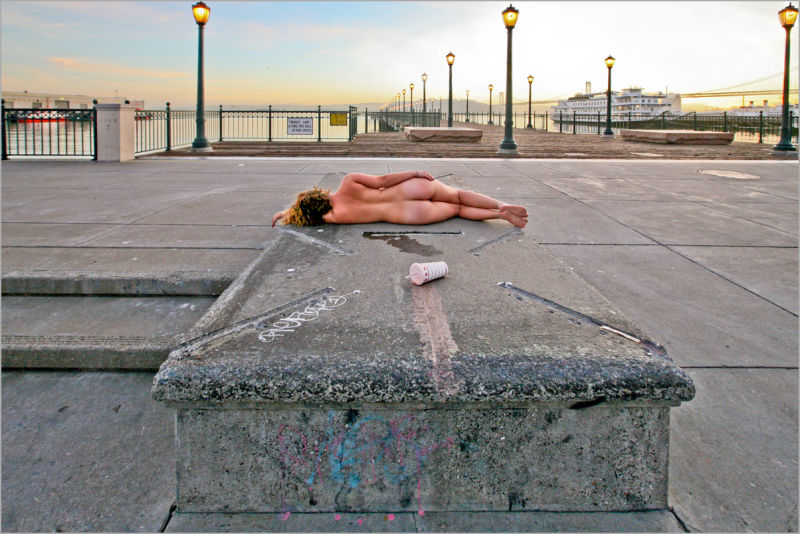 Elle - dawn along the Embarcadero in San Francisco (2008)

Well this isn't supposed to be here. I'd gone by my office to post the sequel to yesterday's post - got it the way I wanted - and failed to post it.

The good news is - my move out of the old place is done. Finally. It feels like I'll be climbing over boxes in the new place forever. But the hard part is behind me and forward feels good.

...speaking of 'behind' - - - the other good news is you get this surprise shot of Elle - having fun along the waterfront. It was a 'future post' that I had no intention of using just now. But I have no images with me and had to either - drive back to San Francisco - or skip a day - or go live with this. Which would you have chosen?

I hasten to add - this image was at Elle's direction. It was she who picked the place and pose and her decision to leave the spent strawberry milkshake in the image. It tells a story and adds so much - full credit to her vision for this one!

We shot a large number of images in a very short period in the spring of 2008. I will post another one that was at her direction soon.

I'm a strong proponent of "post'em if you got'em" : ] I'm thinking of how you shoot these without being arrested...and...how strong the cup is as an element. Glad you are starting to get settled, trade you a day of box hopping for puppy hopping. best...jerry

Well, Stephen, I'm glad you didn't have with you more photos than this one :))
Beautiful rose and tender feminine body looking at the sea in this morning light.
I'm glad also that you finished your moving. Are you going to show us some images of your new place?
Have a great WE, my friend :)

Why not show this shot today? I don't really have a pre-planned posting routine which would prevent me from showing a certain pic e. g. tomorrow. So I am glad you took the easy way and present whatever you had access to. And what a choice today: Amazing in every aspect. An unusual setup, strong colors, a stunning scenery.

@Mirko Herzner: Thank you my friend. I was so exhausted from the days of moving and realized as I read your post that I needed to add the following to the text of this post:

"...this image was at Elle's direction. It was she who picked the place and pose and her decision to leave the spent strawberry milkshake in the image. It tells a story and adds so much - full credit to her vision for this one!"

This oversight has been corrected.

Dustman will be happy this morning... Sorry, seriously this is a nice image, delicate view on a fine morning light.

great choice to go back to frisco, might be taken early in the morning, i love this light, compo and frame are just perfect, i learn so much watching your pix stephen !! 5*

that's what a call a surprise post! very creative idea beautifully executed
btw, do you never get problems with the police when shooting? :)

What a bummer - not having anything else to post :) I think I might have done exactly what you have done by going with this post - I mean - one can't miss a day, can one? But apart from all that, it's a superb image - love the combination of natural and artificial lighting.

I'm happy you didn't keep this beauty from us. This shot is pretty incredible. I like the minimalist approach with Elle and the lonely piece of trash behind her. Perhaps the strongest aspect of this picture for me is the repetition of the lights fading away along the pier. But then there is so much more going on here adding visual interest from the boat to the bridge. I wonder what captivate Elle the most? Oh, and I almost forgot, the light is spectacular. Bravo!

@Yonatan: She was amazing to work with - fully involved and with a most creative eye and spirit. A joy to be with.

I think I remember the last post with Elle, along a freeway somewhere? I tend to post in batches, 7 - 10 images at a time, thus allowing me plenty of time to get new material or think about what to do next.

Terrific composition - the foreground makes a statement, the background is pure art!

nice shot of the nude person on the embarcadero, difficult to capture and you mastered it!

You made a great executive decision in posting this one today. And that made a lot of us quite happy. But I echo a question asked up-thread just a bit - how do you do these nudies without getting arrested? I know, it's SF and all, but...

@Viewfinder: I've done a bunch of these shoots and plan more. Only once did someone call our officers in blue and it was because we were in hoyty-toyty Pacific Heights - way too late into a Sunday morning. The SFPD were not amused as they had their breakfast donuts interrupted by some Captain who had no doubt been awaken by this indignant citizen with a nude woman in front of his/her house.

I could calculate this by the speed at which they got to the scene. We were done and driving away but they were good cops and figured we were their suspects.

They questioned us and hassled us for about ten minutes. It basically came down to the age old 'rights' of the citizen not to see nakedness against the right of the artist to create art. I find being polite and showing eagerness not to be a problem is most of what's required. The model and I are still laughing to this day - and it was a terrific shot:

I think this is where you and I started out.....very Spencer Tunick!!! And I just love his stuff, and love this shot as well!! Beautifully composed, and oh, that light !!!

@Susan: Ah, Spencer - my hero - and indeed this IS where we started out this dance. Dear Susan - I was mentioning you to a fellow photographer over the sunrise this very morning (you'll see him here this Monday). I was telling him about AM3 and our community and I found myself speaking of your work. Specifically - how far you've come with your imagery over this past year and what an asset you've made of exploring and learning through the process online (and beyond). Just FYI.

hey, thanks much for that little bit of info.......it's really nice to know you've made an impact on someone, in a positive way.......glad to be acquainted with you, and all my am3 friends.....it's like having a second family, with everyone having the same interests!!! Only drag, is we all live so far apart.......but you never know when one of us will travel, right? Looking forward to seeing "the photographer" you were discussing me with......will he be in your shot on Monday???

@Susan: I've never used AM3 for 'chat' before - but we're getting close here. Susan - I still think you had mist in front of the lens - the light would need to hit at just the right angle to get the refraction patterns - it just happened to be the one(s) you selected to process. A great image and effect in any case. My best to you...

The human statue such work of Michelange
Great composition!

A very daring, yet stunning image. It is early morning... but the cops are always around, at least here they are.
Good luck with the unpacking..!

Partied a little too hard? This reminds me of the movie "Hair". I think it's wild how you get your models out there, performing your art and sometimes mischief. Quite flattering to have so many ladies take it off for you :) Well done here!

Nothing than having a model who knows what she wants! Brilliant shot! Glad you posted this shot - can't go wrong with an image like this (any time is a good time for something so artistic and beautiful) :) Bravo
Glad to hear the move is over and now you can start your "new beginning"

@Magda: The truth of your opening sentence gets a hearty 'Here, here," from this photographer. Thanks, Magda - I always love hearing from you.

The milkshake is a good addition.

@Twelvebit: I strongly suspect that Elle and I were in much better shape than the celebrant that left it there.