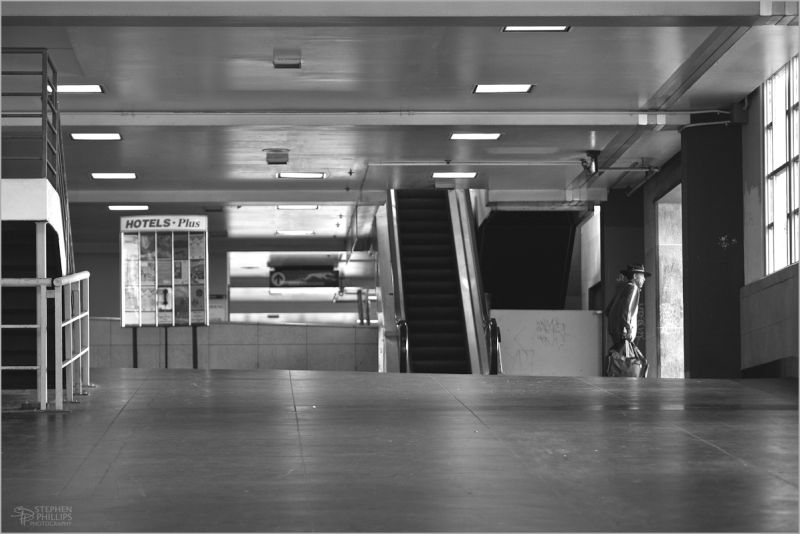 ...is at First and Mission Streets. Surrounded by the Financial District, Rincon Hill, and just a couple of blocks from The Ferry Building.

In its day - it was a bustling hub of activity. All of the buses coming across the bridge from the East Bay arrived here. All four of the city's streetcar lines used this as their terminal. Greyline and Trailways bus lines were here - as was Amtrak. The place breathed life - twenty-four / seven. Food was served through the night. Taxis lined up out front at all hours.

Today - it is but a shell. Buses still come and go here - but with schedules that are a mere hint of back then. Homeless people sleep here during the day - in the basement on the broad, curved, hardwood benches. A concession from the city. Security chases them into the cold night air before locking the doors at midnight.

The building is near its end - and no one will miss it - save those homeless.

Two blocks away - new temporary bus depot is near completion. All stainless steel. Large palm trees have been installed. Lights and canopies are in place.

Soon - this old terminal will be no more.

By 2015 - San Francisco's tallest building is planned for this location. A world class transportation hub will open at its base with a high-speed rail train connecting to southern California. A 5.4 acre park is included in the plan as well.

Soon - I hope to do a photo study of this place before the wrecking ball erases it from the earth. Before - the end of the line...

The story makes this image special. The guy leaving the area seems to have read your lines and walks away...

@Mirko Herzner: Hi, Mirko - thanks. The fellow leaving inspired the story. First the exit - then the lines...

Love the mood you've captured here...and the accompanying text says it all!

@Marcie: Thank you very much.

Oh, Stephen, I just love this kind of B&W, so luminous ! and the man on the verge of leaving the frame (echoing the story of the place) is just perfect : a great photograph here*

not a very glamourous place, but I am sure it has seen its share of visitors and stories.....nicely captured with the traveler leaving the building.....

@Chris: You are correct - this building never had much to do with glamour. Completed in 1939 - the structure is completely utilitarian. Built to support three levels of trains, buses and streetcars - it is industrial. It will take a lot of effort to bring it down.

The image really tells the story.......seems this has happened to many bus terminals.......old makes way for new..... look forward to the series you're planning.....

One early adventurous morning when I wasn't a photographer I boarded Amtrack in Del Mar and arrived in the City at 12:45 AM the next day. This station was closed, so they dropped us off the buses from Oakland at the Ferry Building where were advised to call/pay a cab to lorry us back to this station where I caught the last bus to the Inner Richmond. After 18 hours of Amtrack, I've lost my taste for this building. Perhaps the bullet train will be faster than hitchhiking.

@ordinaryimages: We've probably all had one or more experiences like this along the way. One of mine was in the opposite direction - from here to Long Beach. It was between Christmas and New Years and I had plane tickets. However, SFO had been shut down by dense fog for three days straight. Hence - Greyhound. Arrrgh. I might have been better off walking and wound up breaking off the relationship with the woman I was traveling to be with. Heading south - San Joaquin Valley memories of Howard Johnson's clam strips at 3 AM was the highlight of that one. Even including Disneyland and the Tehachapis - the rest was downhill from there.

i dream to be free to take one bag, my camera, and leave for a trip

@jpdm: My advice - just do it! Some of the finest events in my entire life came from just such actions. You have the bag and you know the location of the door. Go!

Everything will still be in place when you return - and you will be wealthier.

Hey Stephen, great image, great story!!! Perfect lighting, tone and framing to capture the essence of the atmosphere of this building... and catching the man leaving wonderfully heightens the mood! The longer I look at the pic, the more compelling it becomes to me!

@hugo poon: Thanks, Hugo - I caught three captures of this fellow as he came off the escalator (shouldn't that be deescalation?) - this one seemed to tell the story and the light coming at him was perfect.

I can feel the emptiness in this picture. Great post processing!

An interesting read Stephen. Places like this always make for good photos. I'm looking forward to your study.