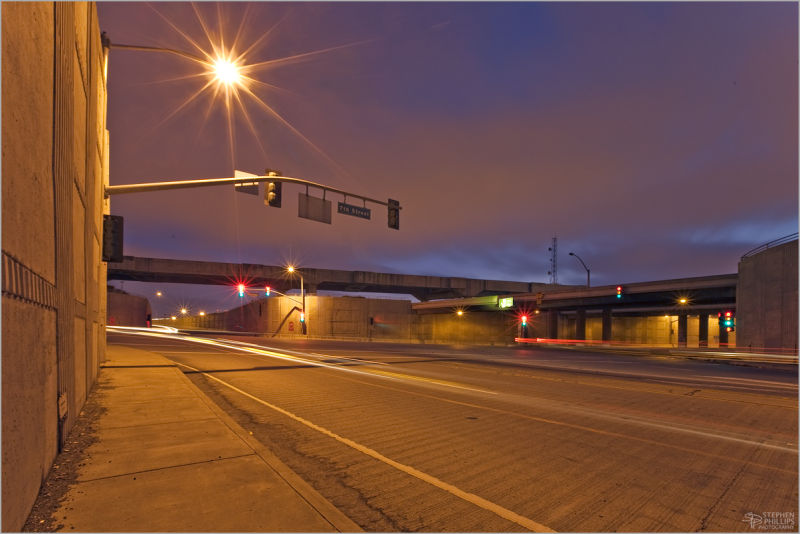 An ode to Joni Mitchell's 'Taxi' -

"Don't it always seem to go,
that you don't know what you got 'til it's gone,
They pave paradise,
and put up a parking lot."

A beautiful twilight over West Oakland, Califonia. Less than two hundred years ago - this would have been a broad tidal marshland - just east and south of The Golden Gate. Wetlands teaming with oysters, bay shrimp, salmon, bass, sturgeon, and endless waterfowl. The bay is now one-third of the size that it was in 1849. The vast majority of the low tidal lands having been filled for housing, airports, and industry.

I was amazed the first time I saw this interchange of Interstate 880. Completely paved and electronically controlled. Nothing visible but by the hands of man. A fortune in reinforced concrete as far as the eye can see.

As I explored the area. Up behind the retaining wall behind me here are a long row of blue spruce evergreens. They were planted (one assumes) as part of the freeway 'beautification'. They are all completely brown and bent to the ground - dead. A fitting tribute in an urban void. Perhaps victims of California's ceaseless budget breakdowns.

These lonely scenes are really beautiful with these warm colors. Good series.

A graffiti artist's heaven by the looks of things.

Cool shot, and although it looks empty, I see the remnants of traffic passing by, don't I ?

@susan: Thank you, Susan - and indeed you do detect light trails from three cars and a truck over 30 seconds.

Stephen this shot is very lonely and cold and fitting for your commentary! it almost has an abstract feel to it - very nice work!

kind of eerie, could be a scene from a sci fi movie (one of those where there are no more natural spaces)....great moody shot...

What a great image. The vehicle lights just add to the magic of this being devoid of anything alive. A true man made place that is completely cold and lifeless on its own.