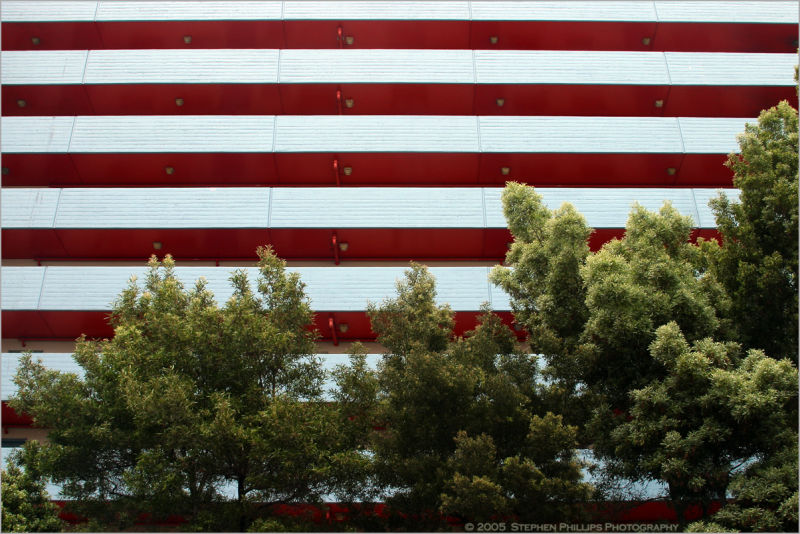 Today's post was inspired by Glenn (viewfinder). On Friday, he posted a terrific image of San Francisco's Chinatown. The image showed a group of apartments with finely detailed, brightly painted wrought-iron railings shimmering in sunlight.

Glenn's posting reminded me of a photo I took of a nearby housing project several years back. This building is the antithesis of Glenn's apartments.

In Chinatown - near the Broadway Tunnel - they had just painted the place when I came by on Mother's Day Sunday morning in 2005. I am reminded of that giant American flag that appeared behind actor George C. Scott during the opening speech in the movie Patton.

In any case, Glenn - this one's for you.

Looks like the bottom of a flag. Nice work.

Great framing on this shot!

first i thought that' s a flag :)
very cool

Dismissing my architectural training, I am not able to resolve this design : ] best...jerry

love these colors -- and the contrast between hard straight man-made lines and the more biomorphic shapes of nature!!!

Great shot, Stephen, very impressive. Thanks for the link to Glenn's

I thought of Patton also when I saw this - nice geometry and contrast between manmade and natural.....

I thought it to be a flag too! Great!

Does remind one of the scene from Patton. Great red and white stripes. The trees add a nice contrast to this interesting background. Beautiful capture and arrangement Stephen.

Wow! Something different and original that's for sure but to live there? maybe not! ;) Great shot! I had to look at it for a while to figure it out! Well done!

i really like this - the basic colors, and the contrast of the hard, straight lines with the soft lines of the trees.