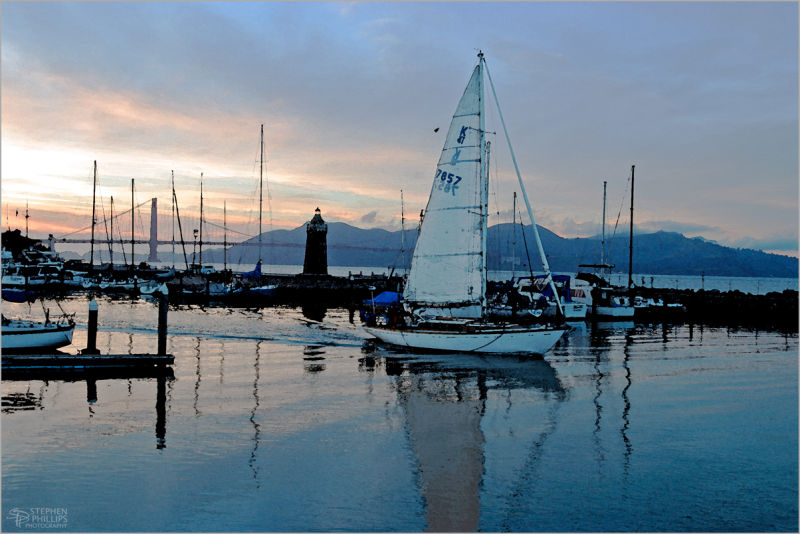 ...from a grateful citizen along the 'other' coast.

[notebook]: Knowing Senator Kennedy's love of sailing - this image came immediately to mind when I thought of doing a tribute. Farewell Old Lion of the Senate. May your thunderous voice of national conscience echo for years to come...

...an archive image from February of 2004 - originally titled 'The Molokai Departs at Dusk'.

This has a lovely painted quality about it Stephen. A nice tribute.

The colors are fantastic. Love the moody blues!!!

A lovely tribute with this beautiful image. There is a grainy feel to it that adds to its appeal.

A lovely and fitting tribute.

I'd happily hang this on my wall,nice one Stephen.

@Jeff: Thank you for the kind words, Jeff.

Hello, Stephen. I posted my comment early in the morning but maybe I did something wrong because I don't see it. In a few words: I add my hommage to yours.

@Paco Díaz: Thank you, Francisco - and in this case - thank you - twice!

Love the evening light and the tones: beautiful shot!

Great tribute and processing in this one. Thoughtful to make a tribute to him.

@Bethany: Thank you, Bethany. I grew up about 10 miles from the White House and was profoundly influenced by John and Robert Kennedy. Their assassinations devastated my early years. Ted Kennedy was masterful in carrying on the family torch. I am deeply saddened at his passing. It closes the book on the Kennedy brothers influence on modern American liberalism - a cause I hold dear with my every breath.

excellent photo, and a fine tribute.

What a wonderful idea to "gift" this image as a tribute to Edward Kennedy. And sailing was his passion as I assume photography is for so many of us on AM3. I admire the gorgeous and moving blue tones and soft edges in this image...with the Golden Gate sitting quietly in the background.

@Dulcie: Thank you, Dulcie - I appreciate your thoughts.