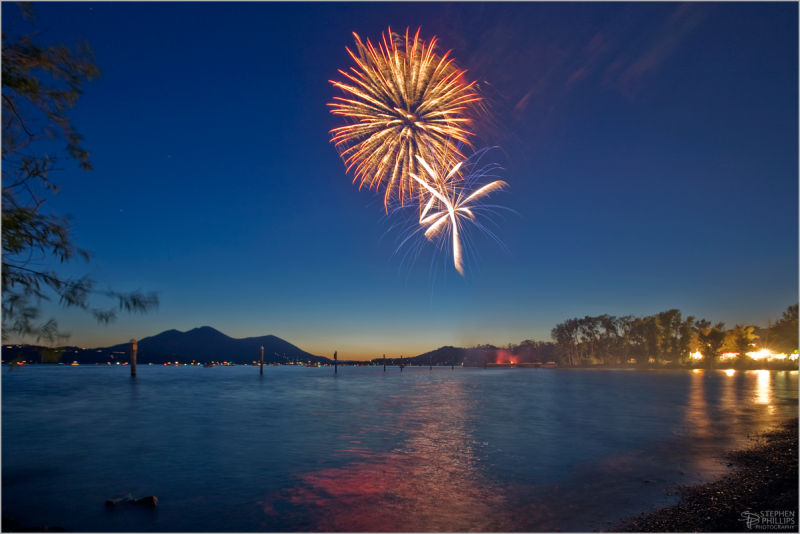 THE FOURteenTH of JULY

...another view of fireworks this year in Clearlake, California

This was actually the view as the pyrotechnics just got underway...

I'm not sure exactly what inspired the thought - but I was determined to get some fireworks reflecting in water. That was the assignment I'd given myself. This is easy all around San Francisco Bay. The big challenge here though is the weather. Fog can be problematic. It can also be very windy and chill along with the fog.

I thought of Sacramento - along the Sacramento River - which is well inland and a beautiful waterway. But they fire their show from the fairgrounds which is along the American River. I used 'Google Maps' to explore the site. It seemed wrong. There is lots of distance between the launch pad and the river. It is hilly and wooded so anything low couldn't be seen - and electrical transmission towers run between the fairgrounds and the river and would be silhouetted in the images. Nope.

I only thought of Clear Lake about a week ago. A friend who lives there gave me an excellent description of where they shoot the fireworks from. Again - it was 'Google Maps' that allowed me to determine that the site would be perfect.

Good shot of the fireworks, I like the sky and the reflections.

Thank you to think about France :-)

Great shot, and what a beautiful location for fireworks..... doing your homework sure paid off !!!! I'm still thinking about Disney in the fall......

Beautiful colors in your fireworks!...Nice capture!

It is beautiful up there at Clear Lake.

great shot - and it's always a good day for fireworks.

very nice shot Stephen, i like colors of firework and great moment you have captured...

great shot with the beautiful view...

beautiful shot - the colors are amazing.....I am impressed with the time and effort you use to plan out this shot - and your use of the latest tools to map out how you are going to get the shot....

Nice shot of fireworks and thanks to makes passing references to our french day of national celebration... :-)

Are these the Bastille Day fireworks? ;) Excellent light and color.