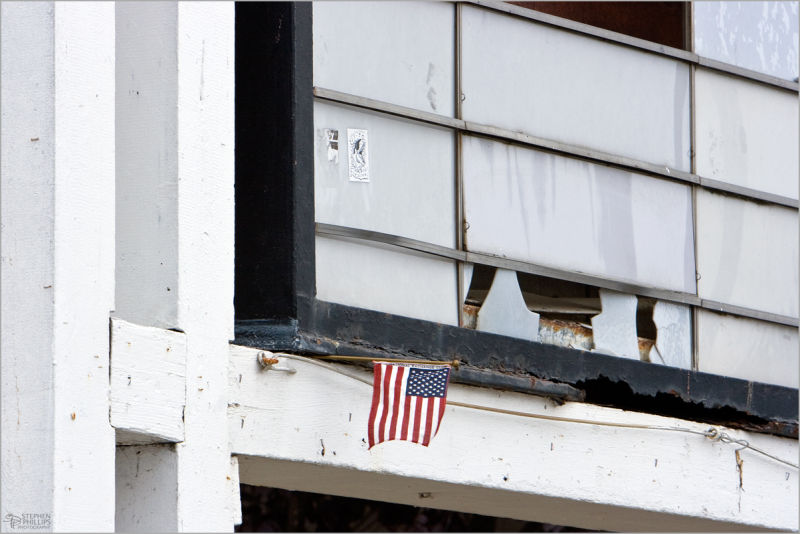 Marquee of the 'Theater Capitola'

This tiny memorial was flying from the marquee of this ramshackle community theater three weeks ago when I was visiting. Last week - it was still there - and so I made this capture. Everyone seems happy to let the small salute stand.

"Opened in 1947 and under the same family ownership/operation until its closure as a full-time movie house in the mid-1990s, the Capitola Theater was a much-loved double-feature bargain theatre serving all of Santa Cruz County. If you didn't want to pay top price at the other theatres in the county, you could usually wait several months and your film would play the "Cap." "

"At times threatened with demolition, the theater was rescued by a group of local opera artists, who built a stage in front of the screen and presented opera there with success, as well as screening movies to fill in spaces in their schedule."

Happy Independence Day, everybody (in the USA - at any rate).

Patriotism even around this old building.... A nice find, Stephen.

A very fitting salute to our independence. Nice shot.

Exceptional capture for the occasion. Has a melancholy feel to it. In my opinion it looks like a good picture of the shape of our economy.

@sherri: I agree - these are sad and trying times in many respects. More optimism in tomorrow's post - I promise. Scout's honor.

Happy 4th of July ! Excellent capture for this occasion :)

Priceless. Nice capture! I love it