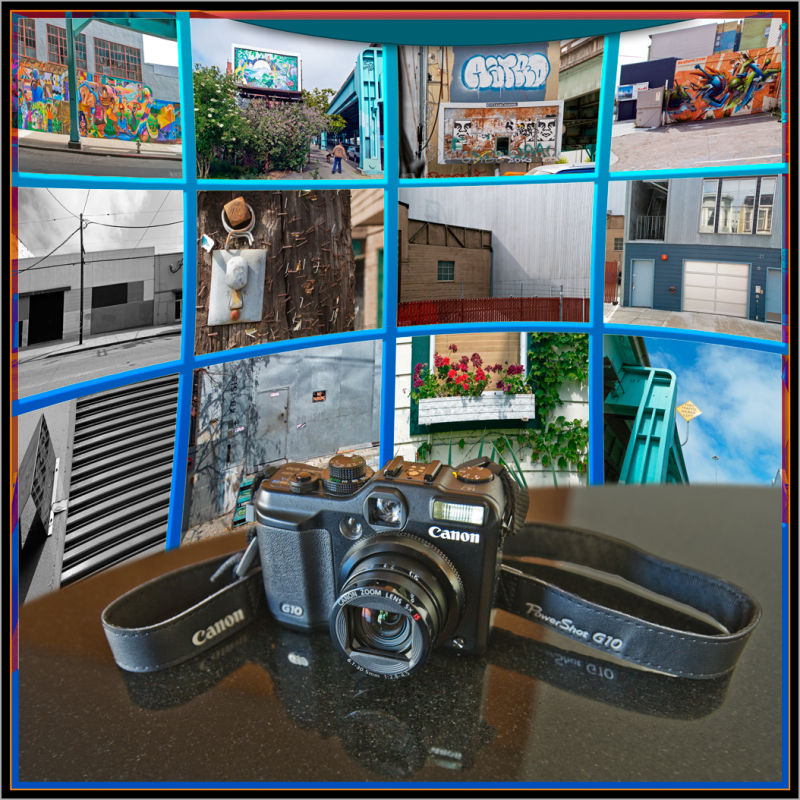 a series: shake down street

So what did these twelve images have in common?

JERRY FREEMAN of Kentucky (ordinaryimages) wins the prize. On Thursday, June 4th he wrote: "I find commonality in the light [time of day] and location [same block] love a puzzler : ] best...jerry"

The prize is two round-trip ferry boat tickets from San Francisco to (Jerry's choice); Sausalito, Tiburon, Angel Island, Oakland, Alameda, or Vallejo. The catch is he has to come and collect the tickets from me personally and it has to be done during my lifetime.

All of the images were taken on the same city block. Thirteenth, Folsom, Twelfth, and Isis (pronounced 'Ice-Sis') Streets - in San Francisco - on a beautiful Memorial Day morning two weeks ago. And all were taken in less than half-an-hour (21 minutes and 52 seconds to be exact)

In every instance, starting with the second image - the position of each capture can be clearly seen from the one before it. (the clues here might be the number of images that have pieces of a building or fence or shadow from the preceding one) Kind of a connect-the-dots exercise.

I hate to admit that I didn't put any of this together until after I got back to my office and processed the images.

All were taken with a new Canon G10 that I'd just taken out of the box. The store was two blocks from here. I made the purchase and pulled over in the shade to place the strap on the camera and read a bit of the instruction book. I've been shooting with Canon cameras for years and so had a good head-start on the system. I set the clock and calendar and started to walk.

I'd been wanting to replace my 'knock around camera' for more than a year. The camera that goes with me when I don't want to carry the big guns. I'd done a lot of research. I was thinking of buying the new Canon SX-1-IS. But that camera is almost as big as an SLR and has 'plasticy' feel about it.

The G10 is a solid little beast with an all metal frame. It is reminiscent of the old 35mm rangefinder cameras of the fifties and early sixties. 14.7 MP. It shoots RAW files. This was a must. It does not have the zoom lens reach of the G9 - shaving the 200mm (equivalent) focal length - to a mere 110mm. But the trade off was extending the 35mm wide angle view to 28mm. And you know how much I love the wide view of things.

Here's what we saw over the past week and a half:

...a lot of luck here. I had no intention of doing anything beyond walking around with my new 'toy'. The morning was beautiful. And image opportunities just seemed to jump at every turn.

Click here for the map of where each image was taken. You will key in on the last (12th) image. From there, going clockwise are all of them. Clicking on each individual map indicator reveals the specific image:

I hope you had fun with this! It certainly has me appreciating A Minus 3 all the more - to be able to share such an exercise with you. I'm home for two days before two more road trips beginning Tuesday. Both paid. Hooray! I hope to catch-up with all of your work as I can. Joyous light to you all...

A very nice little camera, i have one of these, great when you just want somthing smaller with very good image quality

Honestly...I didn't know it was a competition! I may be a redneck hillbilly, but I do know my way around the Bay area. There were several other commonalities, but that would have been piling on. Enjoy the G-10! best...jerry

ps I have been to all those destinations...never once took a ferry...so I will decline your generous prize in favor of seeing an image posted from up along the Mendocino coast...during your lifetime.

Congratulations to the winner!!! :) The answer was simpler than I thought! hahaha And I was trying to think "creative" (grin). Wonderful series - enjoyed it a lot.
Happy to hear about your new camera. I need one of those little point and shoot camera that can do RAW - like you said "it's a must"!

The end of a great series and light is shed on the puzzle.A great idea,look forward to some more in the future maybe !!

What a wonderful thread tying the images together. It explains everything..and really worked!!! Looks like a fun little camera.

This one is really nice ! Congratulations

Hmmm.... I was over-thinking the possibilities WAY too much! Congrats on your new toy and I've enjoyed it's first products.

you are super creative with this series, every image was great and excellently executed.

i like the "connect the dot" idea - it would be an interesting exercise. very clever presentation here, btw, of the photos and camera.

Great wall of shots, that's a nice presentation of your work. G10 is really a good APN...

Kudos to Jerry for figuring this out!!! I was looking "in all the wrong places"..... but enjoyed all the shots, and the "mystery" of it all..... Have great fun with your new toy, as you obviously have been!!

Fabulous series and what a great presentation here today.